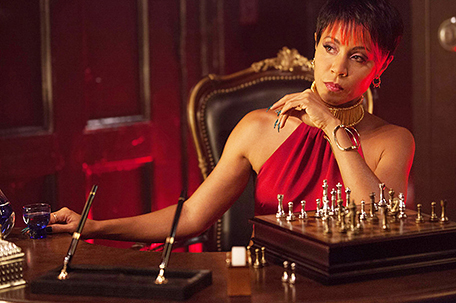 Even in a place like “Gotham,” a black woman is still worried about water touching her hair.

Let’s just say that the introduction of Jada Pinkett Smith’s crime boss character Fish Mooney in the pilot of Fox’s anticipated Batman prequel makes it clear that her outward appearance is just as important to her as the business she handles in Gotham’s seedy underworld, where future villains like Penguin, Poison Ivy, Catwoman and The Riddler are just beginning to operate.

Mooney has a deceptively smooth verbal game, but will not hesitate to administer a beatdown at any given moment – by her own manicured hands. The chance to play a woman like this, Pinkett-Smith says, was something she couldn’t refuse.

“I think women make very interesting villains,” Smith told TCA critics in Beverly Hills on Sunday. “I think often times what drives a woman in all our stories is very different than what we’re used to seeing; [than] how stories are created for men and what drives a man to do what he does.”

Ultimately, Smith gives props to the writers who created Fish Mooney, one of “Gotham’s” lone characters who was not part of the DC Comics universe before the show.

“I think it’s always very interesting when you find someone who can really penetrate the internal life of a woman and get the truth of what makes a woman tick and makes her do what she does,” said Smith. “Someone who knows how to write a great female villain, they can be very, very interesting and scary because there are corners of a woman’s darkness that are not seen very often and can be terrifying.”

Jada Pinkett Smith: The many shades of Jada, from TV nurse to “Karate Kid’s” mom