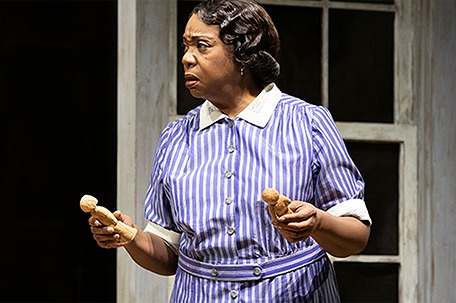 ABOVE PHOTO: Jacqueline Williams as Calpurnia in a scene from “To Kill A Mockingbird”  Photo by Julieta Cervantes

It shines a spotlight on racial injustice, class, and what true morality looks like, told through the lens of six-year-old Scout Finch and focuses largely on her father, Atticus Finch, a famous lawyer who is appointed to represent Tom Collins — a Black man accused of raping a white woman.

“To Kill A Mockingbird” has since been adapted from book, to film, to Broadway. Its latest adaptation , written by Aaron Sorkin and directed by Tony Award winner Bartlett Sherr, is currently on a national tour. The cast stars Emmy Award winner Richard Thomas as Atticus Finch, Melanie Moore as Scout Finch, Justin Mark as Jem Finch, Yaegel T. Welch as Tom Collins, Mary Badham, the original Scout in the 60’s film, as Mrs. Henry Dubose and Jacqueline Williams who plays Calpurnia.

Williams spoke withthe SUN about the importance of the retelling of this classic story and her joy in taking on the role.

Originally from Kentucky, Williams’s love for performance began with a grade school Christmas play, but she didn’t begin truly pursuing her love for theater until high school.

“My family is from Mississippi and Georgia,”she said. “I come from cotton pickers and sharecroppers. No one knew about the business. So, I don’t know what I was thinking. I saw movies, things on television and of course I saw things live, but it just wasn’t registering in my brain that it could be a profession for me… that will just remain a mystery.”

Williams continued pursuing her passion for performance in high school and went on to study at a conservatory. In addition to acting, she studied singing and dance, making her a triple threat. Her performance chops opened opportunities to pursue acting on the big screen (“The Break Up”, “The Lake House” and “Hardball”), the small screen (“Chicago P.D.,” “The Chi” and “Empire”) and on the stage, respectively. Williams was able to carve a niche in the acting world by not allowing anyone to put her talent in a box.

“Very early on, I was very outspoken even as a young person about not being pigeonholed or stereotyped,” she said.

Her ability to take on any role was recognized by the people responsible for casting the national Broadway tour of “To Kill A Mockingbird.”. Williams was initially introduced to the story as a child.

“To Kill A Mockingbird” tackles a number of complex topics, including how we determine morality. Williams shared her perspective regarding the gravity of the story.

“I would describe it as a coming-of-age story through these children’s eyes.” Williams said,  “It’s primarily a young girl, Scout, discovering the differences, the injustices and racism of her time, in a small town in Alabama. It’s also about the power and resilience of the human spirit. That resonates with her for the rest of her life and with the people in that town and in the rest of the world.”

Williams’s Calpurnia is the maid and dear family friend of the Finch family — a role pivotal to the heart of the story.

“Those that know the book and know the film, I hope they come out to this live event — it really is a live event,” Williams said. “You think you know the book, you think you know the film, but you’re really in for a treat. Aaron Sorkin has brilliantly (while honoring Ms. Harper’s work and her story) fleshed this out. You really get a sense of these people, of the town, of the period and some characters like Calpurnia have really been fleshed out. You really get a greater sense of her place in this family, her relationship with the children and her relationship with Atticus — which is the central relationship in this piece. They are very much like a brother and sister. They have a common respect and are confidants of sorts. They can talk about everything and disagree. They support each other and Calpurnia is also able to enlighten Atticus as a representative of the Black community.”

“She’s funny, she’s frank and she is all truth. It is a joy to play her and it’s wonderful to play opposite of Richard Thomas,” she added.

To keep up with Jacqueline Williams and support her journey, follow her on Twitter @jacwilliams. “To Kill A Mockingbird” will make its Philadelphia premiere at The Academy of Music on the Kimmel Cultural Campus from July 12-24. To find out more details on tickets and showtimes, visit: www.kimmelculturalcampus.org.

To Kill A Mockingbird: Review