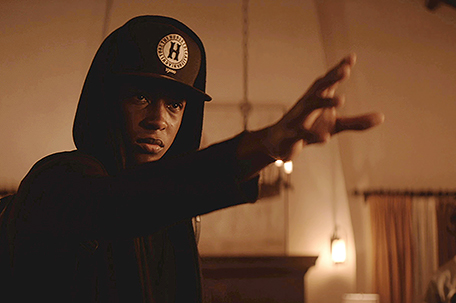 Jacob Latimore has been hailed by Variety, Indiewire and The Wrap as a young breakout star. Having emerged as one of the most promising talents of his generation, his upcoming films are from Academy Award-winning directors and writers, where he stars alongside actors of that same caliber.

Latimore was most recently seen among the ensemble of celebrated thespians in the holiday season film “Collateral Beauty,” directed by Oscar-winner David Frankel. The picture follows the story of a once-successful businessman played by Will Smith, who has slipped into severe depression following a personal tragedy. His friends, played by Edward Norton, Kate Winslet and Michael Pena, show concern when he begins writing letters to various objects on themes like time, love, and death, which then show up as people played by Latimore, Keira Knightley and Helen Mirren.

Latimore just completed production on a yet-to be named crime drama with another Oscar-winning director, Kathryn Bigelow, and her “Zero Dark Thirty” and “The Hurt Locker” screenwriter Mark Boal. That movie chronicles a police raid in Detroit in 1967 which resulted in one of the largest citizen uprisings in United States’ history. Also upcoming is the film “Krystal,” where Latimore joins William H. Macy, Felicity Huffman, Kathy Bates and Rosario Dawson in a romantic dramedy directed by Macy.

Earlier in his career, Latimore was featured in a couple of 2014’s biggest box office hits, playing Ramon in “Ride Along” opposite Ice Cube, Kevin Hart and John Leguizamo, and in the sci-fi thriller “The Maze Runner.” The year before, he starred as Langston in “Black Nativity,” working with alongside Forest Whitaker, Angela Bassett, Tyrese Gibson, Jennifer Hudson, Mary J. Blige and Nas. And prior to that, he made his feature film debut in a lead role in the post-apocalyptic thriller, “Vanishing on 7th Street.”

Besides acting, triple threat Latimore is a dancer and established R&B singer. After a number of hit singles, his debut album, “Connection,” was released last December.

A native of Milwaukee, Latimore currently resides in Atlanta. Here, he talks about his latest movie, “Sleight,” where he stars as a street magician who starts dealing drugs to support himself and his sister after the death of their single-mom.

Kam Williams: Hi Jacob, thanks for the interview.

Jacob Latimore: Thanks for having me!

JL: Sleight is the kind of film you dream about. Sleight balanced the genres of science fiction, romance, family and reality in one story. I was completely drawn into the character and the complex issues he faces. It’s not often you get a script that allows you to stretch your own ability as an actor and I saw the ability to do that with this film.

JL: It’s a genre-bending superhero origin story. Although it focuses on a street magician, Sleight ultimately is a story about the lengths a person will go to protect his family.

KW: How would you describe your character, Bo?

JL: Bo is a guy who is passionate about magic and in his own way strives to do something with his magic that has never been done before. He’s determined. Due to his parents’ deaths, he needed to grow up faster than he anticipated because he has to raise his younger sister. And what he learns as a grown-up affects everything he does.

KW: This was your first lead role. Did you feel a little extra pressure on the set knowing you were playing the protagonist.

JL: Not at all. Because I had to perform at a young age onstage and in the film “Black Nativity” among others, I have never been nervous about the roles I’ve taken, on or off the set. I’ve always been confident in my ability and I hope I bring that confidence to the set and to the characters I portray.

KW: What message do you think people will take away from the movie?

JL: That’s a hard question. I’m not sure. I can tell you that I hope they will take away the importance of family and your individual role in the family unit. And I hope it inspires people to pursue their dreams in spite of adversity.

KW: You’re a triple threat: actor, singer, dancer. Which is your favorite?

JL: Had you asked me that question a year and a half ago, I would have said music. However, after working with Will Smith and Kathryn Bigelow and absorbing all that great experience from people who have done this for years, it’s more of a balance. I love performing and, whether it’s music, acting or dancing, I’m happy. I feel at home.

KW: You recently released your first album, “Connection.” How would you describe yourself, musically?

JL: Musically, R&B music has sort of always been the foundation of who I am as an artist, due to the influence of my dad and my uncles. At the core, that’s who I am, and I definitely wanted my first album to reflect it.

KW: You’re just 20 years-old. What’s been the secret to your success at such an early age?

JL: At the end of the day, it really comes down to your passion and what you are willing to do to pursue your dreams. You have to be consistent, just like doing homework everyday. It’s practicing your craft to make yourself better. An important part of that is family support, which I’ve always had.

JL: Miles Morales’ “Spider-Man” movie. I’d love to do that.

JL: I know how to cook several things. I’m great with breakfast, like some really good eggs with a little garlic seasoning and salt and pepper on lightly-toasted bread.

JL: When I was younger, music was an inspiration from Michael Jackson to my family. Although I did love to watch great television like “The Cosby Show “and actors like Denzel [Washington] and Will Smith, I always loved great films, and I think that overall inspiration prepped me for what I do today.

JL: Be kind to EVERYONE!

KW: Thanks again for the time, Jacob, and best of luck with the film.

JL: Thank you so much, Kam. I really appreciate your taking the time to talk with me.

To  see  a  trailer   for  Sleight, visit: https://www.youtube.com/watch?v=ORL1d7GWoBc