Jabari Banks and Morgan Cooper: An inside look at Peacock’s Bel-Air 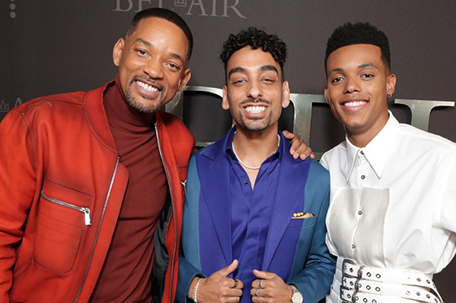 When “The Fresh Prince of Bel-Air” originally aired in September 1990, many of us fell in love with the Banks family as we welcomed Will, Carlton, Hilary, Ashley, Aunt Viv, Uncle Phil and Geoffrey into our homes and hearts. Writer and director Morgan Cooper has reintroduced The Fresh Prince to a new audience with Peacock’s “Bel-Air”, the reimagining of the beloved sitcom. West Philadelphia native and budding new talent, Jabari Banks leads the dynamic cast playing Will Smith in his first major role. Additional cast members include Coco Jones as Hilary, Olly Sholotan as Carlton, Cassandra Freeman as Aunt Viv, Adrian Holmes as Uncle Phil, Akira Akbar as Ashley, Jimmy Akingbola as Geoffrey, Simon Joy Jones as Lisa, April Parker Jones as Vy and Jordan L. Jones as Jazz. Jabari Banks and Morgan Cooper spoke to The SUN about their incredible journey with “Bel-Air” thus far.

There are a lot of parallels between and Jabari Banks and Will Smith’s careers. Both began their careers playing The Fresh Prince. Banks shared his experience taking on such an iconic character that spans generations.

“It is an immeasurable amount of pressure, but I don’t feel any of it,” Banks said. “I’m just grateful to be in this position and to pay it forward someday to another kid that looks like me in the same way that Will did for Morgan, and Morgan did for me. It’s just an amazing opportunity… once in a lifetime and I’ll never take it for granted.”

Cooper’s opportunity to write and direct “Bel-Air” was the result of him taking a shot… literally. He created a trailer for his perspective of what The Fresh Prince of Bel-Air would look like today. Will Smith and a number of other celebrities took notice and the rest is history.

“When the idea hit me, I knew it was something special. It always starts with passion. I always say keep the same energy no matter what the idea. This just happened to be the idea that landed on my heart, so I had to make it happen,” Cooper said. “I knew the responsibility of taking on a project of this magnitude and creating something so beloved, but I wanted that responsibility from the start. It was all about expressing from an honest place and surrounding myself with brilliant minds. When you do that, how can you go wrong.”

Will Smith has fully supported the project coming on board as an executive producer.

“That’s the cherry on top! The fact that he cosigns Morgan’s vision, he’s backed us throughout this whole process, and he keeps pushing us on his page with full support… that’s amazing! That’s all you can ask for. The Smith family loves it, they support us 100% — you don’t get better than that,” Banks said.

Cooper added, “Will is just the best guy. We grew up with him, he’s a Black hero to us in every sense of the word. He’s paved so many paths.
He’s the sincerest human being and he’s so generous with wisdom. I can’t say enough just in terms of having his support for this vision. It really meant the world to me and it still does and to see his connection with Jabari taking shape and their bond is so incredibly special.”

Bel-Air’s casting is spot on, with powerful individual and collective performances.

“I’m going to highlight someone — Cassie Freeman,” Cooper said. “She is special. Her energy, when we say cut is totally different and it’s so interesting to see how she drops into Aunt Viv. She takes on this whole tone, it’s really insane to see and I admire that,” he elated. “There’s something about everybody that I admire throughout this cast. They’re such a special cast and we’ve all truly bonded. I’m so grateful that this is my first experience with a cast that’s so loving and took me in with open arms,” Banks said.

In addition to the palpable chemistry between the cast and intriguing storylines, Bel-Air does not shy away from tackling concepts that are often reserved for private conversations within the diaspora. Some of those concepts include selling out, staying connected to the community and the idea of what it means to be Black.

“A lot of it is a biproduct of the story. A young Black man from West Philadelphia, going to Bel-Air — what would that actually look like? What would that culture clash look like with his cousin — a 16-year-old Black male who has lived in Bel-Air his entire life, who spent his time in a lot of white spaces from the outside looking and feeling like he needs to assimilate to survive and thrive in that environment?” Cooper asked. “What happens when they start to have a conversation about certain language that is being used? It’s important to have those uncomfortable conversations. It’s uncomfortable but it’s real, and it’s the stuff that a lot of people don’t want to talk about. Let’s bring those issues to the forefront and have those conversations about money, wealth and survivor’s guilt.”

Banks added, “I think we get to see that through the character Uncle Phil too as he’s crawling up the ranks. Seeing what it looks like to be a successful Black man, but also needing the help of your fraternity that you haven’t be a part of for a while. He’s running for DA now and every question people are asking is, ‘How big is your house?, How much money do you make? Are you still connected to your community?’ That’s a conversation that we’re having throughout the show and it’s really important.”

“Bel-Air” does an incredible job at reimagining The Fresh Prince, making it current, while simultaneously paying homage to the original show that audiences know and love.

“We didn’t want to make something that felt like it was contingent on what they did 30 years ago. I think that’s a dangerous way to create when you feel bound to something. All of the nods that we did for the sitcom were very organic… it was never formulaic. We never wanted to put a box on what we were making, because that’s a reboot and you can’t reboot The Fresh Prince of Bel-Air”, Cooper explained, “This was born at a grassroots level. I think people feel that intentionality of let’s make something that’s honest and honor the spirit of these characters. We’re going to do our own thing and carve our own path with how we tell these stories. What they did to be clear was iconic, it was lightning in a bottle, it’s timeless and it stands on its own. I hope when it’s all said and done, people will be able to say the same thing about our show.”

Banks added, “It’s amazing that we get to see this family love each other, then fall apart and fall back in love with each other. I think that’s going to resonate with so many people. I just hope that they leave the show with a sense of pride, wanting to be your authentic self, seeing Black joy displayed on screen and with a sense of community and love. This show is Black excellence personified.”

Be sure to follow Banks and Cooper on social media @JabariBanks and @CooperFilms. New episodes of Bel-Air are available to stream every Sunday on Peacock, be sure to tune in!

US premiere of Welsh playwright Abi Morgan’s hit play, “Tiny Dynamite” to be produced at the 2010 Fringe Festival