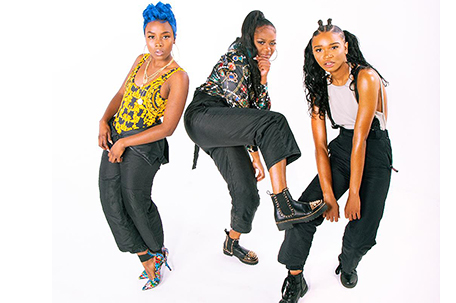 Philadelphia has always been an abundant source of musical talent. Among Philadelphia’s latest rising talent is R&B trio, Aviance. The girl group is comprised of Philadelphia natives Beyyond, Dominique Nicole and D-Day Da Rappa. The group was the brainchild of manager, Ali Hyman. The name, which derives from the word ambiance, replaces the ‘b’ with a ‘v’ as a nod to their voices… a blend of R&B, soul, hip-hop and a touch of 90s essence. The group is making waves with their newest project, “It’s Aviance”. The ladies of Aviance sat down with the SUN to talk about their journey to creating their sophomore album and what fans can expect.

In a music industry that often creates carbon copies of similar sounds and acts, Aviance is making it a point to stand out. They coined the term “Bad Girls of R&B”, as a constant reminder of their desire to do something different.

“We actually came up with the name “Bad Girls of R&B” ourselves. The main reason why, is because we are the group that’s going to go against the grain,” Dominique said. “We’re not your trendy average girl group that is selling sex, or trying to overcompensate with extra theatrical things to make up for lack of talent. We also don’t take any mess. Whatever we want to do or don’t want to do, we’re going to stand up for.”

“Being “The Bad Girls of R&B” means singing the songs we want to sing, and going about things the way we want to, despite what other people think or how they judge us,” Beyyond added. “We’ve always tried to stick to doing things our own way – from what we wear, to how we choose to style our hair, or do our makeup. We’ve always been rebels against the trends of the industry. It’s really a lifestyle… being ok with being different and standing out.”

Going against the grain can often be an uphill battle, especially as an independent artist. D-Day Da Rappa shared some of the challenges they’ve experienced on their journey.

“One of the biggest challenges of being independent artists really is just going out there progressing and fighting through the political things. Some people are signed, and some may have a machine behind them. When you don’t, you have to always be on point,” she said. “We always have to think about the next thing that we need to do to progress our dream. As independent artist[s], we want to have control of our own destiny. When you have control of your own destiny, you’re completely responsible for it. We have to make sure we keep up and excel over everybody.”

In 2018, Aviance entered into a partnership with Spring Garden Records, which is the official record label of the Community College of Philadelphia, to release their sophomore album, “It’s Aviance”.

“It’s been a great journey thus far,” Dominique said. Beyyond added, “We’ve worked with the president of Spring Garden Records and collaborated with a few artists at the label as well. They have such a dope group of artists. We have a lot of people invested in our future and I think there are some great things that will come out of that collaboration.”

With an album entitled “It’s Aviance”, the question becomes, what should an album like that say about the group behind it?

“I would describe the album just as I would describe us”, D-Day Da Rappa stated. “We’re doing our music, having fun, really singing and that’s what you’re going to hear on the album. It’s what you would see if you were right in front of us. We put our heart and soul into this album. We’re not a gimmicky group. We’re a group you can relate to you, and we try to put that into our music”.

“It’s us sharing the truth of our lives and our experiences paired with everything we felt during the moments when we were in the studio,” Beyyond added. “Most of the material we have on the album was not premeditated. We literally free styled a lot of stuff that you’re going to hear on the album. It’s because together in the studio we have great energy and vibes. You get to see it all, including how we matured from our last album. We tried our best to be very transparent and relatable.”

“It’s Aviance” is available on all music platforms. Visit www.badgirlsofrnb.com to stay up to date with all things Aviance and follow them on Instagram and Twitter at: @aviancemusiq.