“It belongs to us!”: Tense French trial over colonial art 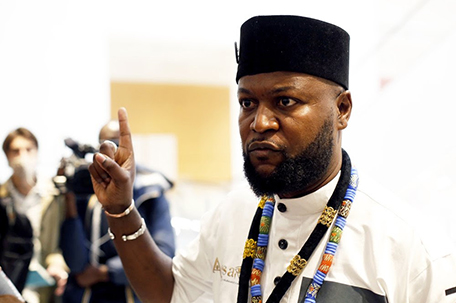 ABOVE PHOTO: Congolese activist Mwazulu Diyabanza arrives at the Palais de Justice courthouse, in Paris, Wednesday, Sept. 30, 2020. The controversial Congolese activist and four others are going on trial Wednesday on aggravated theft charges for trying to remove a 19th century African funeral pole from a Paris museum, in a protest against colonial-era plundering of African art.  (AP Photo/Thibault Camus)

PARIS — Is dislodging African artwork from an European museum a political statement, or a criminal act? That’s the question a French court weighed Wednesday in an emotionally charged trial centered around a Congolese activist campaigning to take back art he says was plundered by colonizers.

“It belongs to us!” shouted a Black woman watching the trial, breaking down in tears and storming out after a lawyer for Paris’ Quai Branly Museum insisted that its holdings — including tens of thousands of artworks from former colonies — belong to the French state.

Congo-born Emery Mwazulu Diyabanza and four other activists went on trial on attempted theft charges for removing a 19th century African funeral pole from its perch in the museum in a June protest livestreamed on Facebook. Guards quickly stopped them; the activists argue that they never planned to steal the work but just wanted to call attention to its origins.

Lurking beneath nearly every exchange in the courtroom was the question of whether and how former empires should atone for colonial-era wrongs. The question took on new urgency after this year’s global protests against racial injustice unleashed by George Floyd’s death in the U.S. at the knee of a white policeman.

Diyabanza seized on that mood and has staged three livestreamed museum protests in recent months — in Paris, Marseille and the Netherlands.

If convicted of attempted group theft of a historical object, Diyabanza could face up to 10 years in prison and a 150,000 euro fine ($173,000). However, the lawyer for the French state did not ask for prison time, demanding only modest fines. A verdict is scheduled Oct. 14.

Diyabanza defended what he called a “political act” and said it’s about time that Africans, Latin Americans and other colonized communities take back ill-gotten treasures. He accuses European museums of making millions on artworks taken from now-impoverished countries like Congo, and said the pole, which came from current-day Chad, should be among works returned to Africa.

“We are the legitimate heirs of these works,” he said. But he insisted that “appropriation wasn’t my goal. … The aim was to mark the symbolism of the liberation of these works.”

The presiding judge asked the activists why they thought they had the right to take the law into their own hands. He insisted that the trial should focus on the specific funeral pole incident and that his court wasn’t competent to judge France’s colonial era as a whole.

Quai Branly lawyer Yvon Goutal argued that because of the discussions underway between France and African governments, “there is no need for this political act.” The French state “is very committed to this, and serious” about following through, he said. The prosecutor said the activists should have made their point via more peaceful means.

Defense lawyer Hakim Chergui argued that it shouldn’t have taken this many decades after African countries’ independence to settle the issue. He choked up when talking about the skulls of Algerian 19th century resistance fighters long held as trophies in a French museum and returned to his native Algeria this year.

Applause and boos periodically interrupted the proceedings. A crowd of supporters shouted in anger at not being able to enter the small, socially distanced courtroom, and judges sent Diyabanza to calm them down.

The Quai Branly Museum, on the banks of the Seine River near the Eiffel Tower, was built under former French President Jacques Chirac to showcase non-European art, notably from ex-French colonies.

A 2018 study commissioned by Macron recommended that French museums give back works that were taken without consent, if African countries request them. So far, France is preparing to give back 26 works of African art — out of some 90,000 works believed held in French museums, most in the Quai Branly.

Time for France to give back looted African art, experts say