Inside the Met Gala: Real-life cardinal gets star treatment 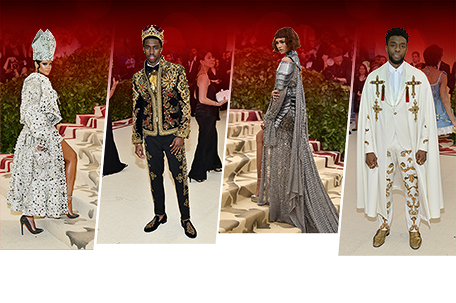 ABOVE PHOTO:  Rihanna, Christian Casey Combs (son of sean ‘diddy’ combs), Zendaya and Chadwick Boseman appearing at  The Metropolitan Museum of Art’s Costume Institute benefit gala celebrating the opening of the “Heavenly Bodies: Fashion and the Catholic Imagination exhibition” on Monday, May 7, 2018, in New York.  (Photo by Charles Sykes/Invision/AP)

NEW YORK — It was cocktail hour at the Met Gala, the most glittery and exclusive event on the New York social calendar, and celebrity guests were thronging around the imposing Temple of Dendur at the Metropolitan Museum of Art, sipping drinks and munching on canapes. Pretty much everyone in the room was famous, some hugely so, but one guest seemed to be getting a little more attention than most: Cardinal Timothy Dolan, the Roman Catholic archbishop of New York.

“Cardinal, have you met Huma?” someone asked, leading him over to Huma Abedin, the longtime Hillary Clinton aide. Others waited their turn to speak to him. It seemed fitting, on a night when all the stars were trying to channel the theme of Catholicism, that the real-life cardinal in attendance was a star among stars.

Dolan was effusive about the exhibit making its debut that evening, “Heavenly Bodies: Fashion and the Catholic Imagination.” He was particularly enamored with the stunning pieces — 42 of them — on display from the Sistine Chapel sacristy at the Vatican, many never seen outside Rome or in public at all, including jewel-encrusted tiaras and intricately embroidered papal cloaks, known as copes. “Those pectoral crosses, those copes, are you kidding me?” he said admiringly. A waiter came by with tiny mini-grilled cheese sandwiches. “You got any tomato soup with that?” Dolan joked.

Nearby stood actor Gary Oldman with his wife, Gisele Schmidt, watching the crowd quietly. The Met Gala is the kind of party where you can be this year’s best actor Oscar winner, and nobody takes much notice. (For the record, best actress winner Frances McDormand was there too, with a bright blue bouquet of leaves around her head, as was last year’s winner, Emma Stone — no leaves.)

The couple spoke admiringly of the way the exhibit drew parallels between centuries-old religious imagery and attire, and modern fashions by designers like Gianni Versace, Alexander McQueen, Christian Lacroix and others. “It’s all dressing up, isn’t it?” noted Oldman, of the parallels.

And then there was a bugle call — a very loud one, by a team of buglers. Guests were being summoned to make their way from the Temple of Dendur, or from the various exhibit galleries, to the American Wing, where a choir was performing before dinner. “Are they going to do that between every course?” quipped Oldman of the rather stunning sound.

The evening began with the usual red carpet procession up the famed museum stairs — not red at all, actually — before a gaggle of furiously clicking cameras lining both sides, and shouts of, “Who are you wearing?!” Outside the museum entrance, crowds of onlookers stood behind police barricades, hoping to catch a glimpse of some of the more dramatically attired guests.

In that latter category would be Rihanna, who never disappoints at a Met Gala and wasn’t about to start now — not when she could wear her own, ornate papal mitre, bejeweled minidress and cloak. Or Katy Perry, dressed as an angel, with huge wings that recalled the angel in the current Broadway production of “Angels in America.” Perry isn’t in that show, but Andrew Garfield is, and he was at the gala, too — naturally.

Once in the museum, guests were free to wander the many galleries housing the ornate exhibit, which stretched from the Anna Wintour Costume Center downstairs, where the Vatican collection was being displayed, to the Byzantine and medieval galleries on the main floor, where designer fashions were interspersed among the religious objects and artworks.

One thing they weren’t free to do: smoke. The museum was embarrassed last year when photos were posted on some fashion celebrities’ Instagram feeds showing them puffing away in the ladies room. The museum said it would make sure that wouldn’t happen again; in the ladies room this time, there was a huge no-smoking sign.

The gala is famous for attracting luminaries of Hollywood, of fashion, music, sports, TV and the stage. But there was also a former presidential candidate wandering the halls Monday evening and chatting with fellow guests like Harry Connick Jr: Mitt Romney, along with his wife, Ann. “It’s wonderful that the Vatican allowed the Metropolitan to show these,” said the 2012 Republican candidate as he examined the Vatican objects, which include a tiara studded with 19,000 gems, mostly diamonds. “Even if you went to Rome, you wouldn’t get to see these.” He noted that religion and art “have always gone together.”

Broadway star Cynthia Erivo echoed the same idea. “There is definitely fashion in the church, and in religion,” she said. “Look at the craftsmanship.” The Tony winner was dressed to the nines in a velvet gown of deep purple — one of the colors of Catholicism — a bejeweled brow and nose ring, and most incredibly, fingernails nails adorned with detailed religious imagery.

Erivo explained that she grew up in a Roman Catholic family in London, attended a Catholic school, and had deeply etched memories of attending Mass with her mother as a child. “It definitely has an effect on the way you see things,” she said. For her gala attire, she said she had wanted to pay homage to the richness of church imagery, not by dressing as a nun or priest, but by channeling some of the ornate religious objects.

The exhibit’s curator, Andrew Bolton, has said that he initially wanted to make a multi-religion show, including Islam and Judaism, but decided to focus on Catholicism for now because there was such a wealth of material to choose from. One guest, actress Lynda Carter, wore a Star of David brooch in her hair and a golden crown with Hebrew writing that said, “Never forget.” Even though she was born Roman Catholic, she noted, she had raised her children in the Jewish faith.

In her teal-hued Zac Posen structured gown and her crown, Carter said she felt something like a high priestess — or, she added, maybe just Wonder Woman.

Met Gala: Inside, it’s hard not to step on someone’s dress