Insane in the Brain—Will Smith tackles the NFL 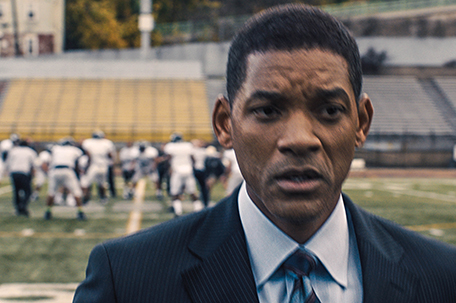 ABOVE PHOTO:  Will Smith stars in Concussion.

For most Americans, Sundays belong to the National Football League. Football is an even bigger deal to some than Jesus Christ because, let’s face it, people rush from their pews and onto their couches to make sure they’re in time for kickoff.

This fact was lost on Nigerian born Dr. Bennet Omalu, a rising neuropathologist, when he uncovered the truth about a serious disease that was affecting retired NFL players called chronic traumatic encephalopathy or CTE.

The new film, Concussion tells the story of how Dr. Omalu’s discovery of CTE, it’s long term effects on the brain, and how that discovery brought him both triumph and strife and pitted him against one of the world’s most powerful entertainment conglomerates. Written and directed by Peter Landesman and starring Will Smith as Dr. Omalu, the story is taken from co-writer Jeanne Marie Laskas’s GQ article “Game Brain”.

The story begins in Pittsburgh, home of the Pittsburgh Steelers, winners of six Super Bowls. Some of the same players who spent their glory days on Heinz Field had began experiencing great trauma off of it. At first it would start small such as forgetfulness or headaches, but in many cases, it became worse over time and culminated in chronic depression, drug and alcohol abuse and in the most tragic cases, suicide. These men had no idea what was wrong with them, but they knew that there was something in their brains that made them unrecognizable, even to themselves.

Dr. Omalu was given the assignment of finding out what this malady was and what was causing it, beginning with the autopsy of former Steelers great Mike “Iron Mike” Webster, (David Morse) who had been battling this unknown disease until he died at age 50. Webster’s was the brain that started it all, causing a study to be written about CTE and the NFL.

Once the study got out, things blew up so much that the NFL attempted to slander Dr. Omalu’s name along with those who helped him see his study to fruition including renowned pathologist Dr. Cyril Wecht (Albert Brooks). These men were taken to hell and back all because the truth of the science couldn’t be a well kept secret.  Not to the scientists and not to the families of these players.

This film felt unfinished.  I appreciated the detail shown to the players’ suffering, even though it was hard to watch at certain points.  There is a Frontline documentary that aired in 2013 entitled “League of Denial: The NFL’s Concussion Crisis” that deals with this entire matter in great detail.  I left the theater wanting to see this documentary because the film felt so watered down.

Smith did an excellent job portraying Dr. Omalu, and his accent was pretty convincing as well.  This film seemed as if it were designed for him to run away with an Oscar.  In order for this film to be shown, the NFL was downplayed to a certain degree because of legal matters that would’ve been much more messy.  Between that and Dr. Omalu basically worshipping Dr. Cyril Wecht, it was hard to watch.

To top it off, Dr. Omalu’s love interest Prema Mutiso (Gugu Mbatha-Raw) is the most one-dimensional character in film.  There was really no purpose of her being in this movie whatsoever, and the way her character is written as a docile love interest with little personality who ends up pregnant and servile sets women in Hollywood back a good five years. Most of her scenes involve her following behind Omalu or watching him work, and the buildup to their relationship plays out more awkwardly than catching middle schoolers attempt to feel each other up after school.

That said, I would recommend seeing this film because there is some good writing here. There are a few monologues that give the film great substance, and watching the men battle the NFL is definitely something to see.  This film will definitely give you a different view of the NFL and might also make you want to look deeper into CTE and the studies done since the discovery of the disease.  I know watching the games on Sunday will never be the same for me.