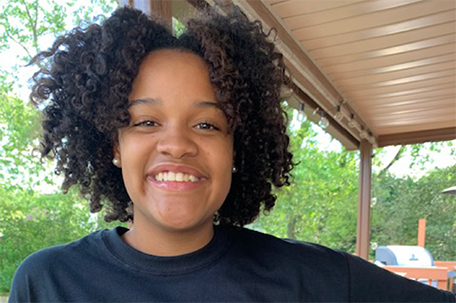 Police brutality has always disproportionately targeted Black and Brown communities. This reality has been front and center over the past few months. Black Lives Matter is the mantra heard echoed in unison throughout the recent protests, along with the demand for justice and equality for all. Young people have been on the forefront of that fight.

India Alston, the daughter of Philadelphia’s own Charlie Mack Alston, long time philanthropist and advocate for unity, at just 13-years-old, has decided to use her voice as a means to amplify messages of equality.

Alston spoke with The Philadelphia Sunday SUN about the T-shirt line that she’s using as a platform for change.

“My dad and I were on Facetime,” Alston said. “We were talking about police brutality and all the problems going on in America right now, and how police officers can take off their uniforms, but people of color can’t take off their skin color. He said, ‘wow, that’s an amazing quote — you should put that on a t-shirt.”

After the countless filmed murders of Black people at the hands of police officers, the Black Lives Matter movement has loudly reminded the masses that Black lives are not dispensable. However, counter arguments made to Black Lives Matter have been a combination of the terms “All Lives Matter” and “Blue Lives Matter.” Alston acknowledged the flawed logic in that sentiment, noting that once Black and brown police officers remove their uniforms, the protection of that uniform is removed with it.

“Police officers always say they risk their lives while they’re in uniform, but we risk our lives all the time,” she said.

That perspective led to the two quotes featured in Alston’s t-shirt line — her original quote “You can take off your uniform, but I can’t take off the color of my skin” — and the other from her uncle, Philadelphia’s own Will Smith.

“I think they were both really deep quotes,” she said. “I thought that my quote and my uncle’s quote — ‘Racism is not getting worse, it’s getting filmed’— would help a lot of people open their eyes to see that we risk our lives,too, and our skin color is not a weapon.”

After being encouraged to create a t-shirt line by her father and seeing an influx of other young people speaking out against systemic racism, Alston dove head-first into using her voice and shirts as a platform for her message.

“I’m happy that a lot of young kids are stepping up and being part of the protests,” Alston said. “A lot of times with kids, and even myself, we can be lazy.We’re small, but small voices are really big. I feel like if we just take our time to say something when we think it’s important, it will go a long way. It’s great to see other kids out there showing that they have a voice.”

Starting a business in the middle of a pandemic is no easy task. Alston discussed the process of turning her concept into something tangible and getting it out to the public.

“It definitely has not been the easiest because of the coronavirus and quarantine. You want to be safe, but it’s definitely been a challenge that was for the best,”she explained. “It’s not even about the money — it’s about getting the message out.”

Despite the obstacles the pandemic presents, the reception Alston has received from family and the public has been positive.

“My dad, my mom and I have a bonus dad and a bonus mom — they’ve always been my number one fans no matter what I do! They’ve always been so supportive and always listen to what I have to say — that really means a lot to me,” she said. “The response has been amazing! I’ve been getting so much love and support from everyone and it just means the world to me.”

In addition to the support from her immediate family, Alston shared Smith’s reaction to her paying homage to his quote.

“His response was amazing, too,” she said. “I saw him on Instagram live. He was excited and I was so excited to see him. He read my shirt and said ‘I deeply and desperately want to help you with anything that you do.’ ”

Alston is wise beyond her years and left the following final words of encouragement to other young people.

“I just want to tell everybody that kids have a voice,” she said. “All the kids that are listening and watching, you should definitely use your voice because you never know how far it’s going to take you. You never know what feedback you’re going to get, or how powerful your voice is until you use it.”

Alston is looking to expand her line in the near future, but for now she plans to continue to focus on using her current line to promote justice. You can support and purchase India Alston’s shirts at her website: www.quotes-for-justice.myshopify.com or by visiting and following her business on Instagram at: @indias.boutique20.