‘In The Heights’: A Review 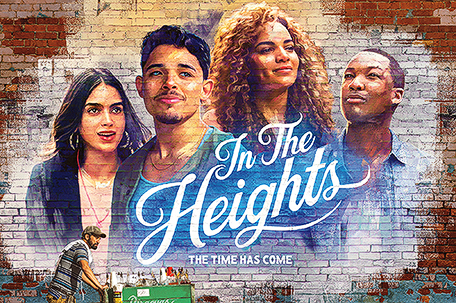 So much of who we are is tied to our culture and heritage. The film, “In the Heights,” based on the Broadway musical of the same name, is a prime example of the way culture impacts the way we move through life.

Before the success of “Hamilton,” Tony, Grammy and Emmy Award-winning actor, producer, singer-songwriter and playwright Lin-Manuel Miranda wrote the music and lyrics to “In The Heights.” Miranda worked alongside Quíara Alegria Hudes, who wrote the book, to bring the magical musical to life.

The musical achieved great success on Broadway and on national and international tours, winning Tony Awards for “Best Musical” and “Best Original Score,” a Grammy for “Best Musical Show Album” and a Laurence Olivier Award for “Outstanding Achievement in Music.”

The beloved music and characters of “In The Heights” are shining equally as bright on the big screen in the film adaptation. Directed by Jon M. Chu, with the screenplay written by Hudes, the film stars: Anthony Ramos as Usnavi, Melissa Barrera as Vanessa, Corey Hawkins as Benny, Leslie Grace as Nina Rosario, Olga Merediz as Abuela Claudia, Lin-Manuel Miranda as Mr. Piraguero, Stephanie Beatriz as Carla, Dascha Polanco as Cuca, Daphne Rubin-Vega as Daniela, Jimmy Smits as Kevin Rosario and Gregory Diaz IV as Sonny de la Vega.

“In the Heights” centers around the members of a predominantly Latino community in the Washington Heights section of New York.  The story is told through the eyes of Usnavi (Ramos), the owner of a popular bodega he runs with his cousin Sonny (Diaz). Originally from the Dominican Republic (DR), Usnavi has dreams of leaving New York and returning to the beautiful shores of the DR. Stuck between a rock and a hard place, there are a few obstacles in the way of Usnavi escaping to paradise. Some of those roadblocks include; finances or lack thereof, the love of his life Vanessa (Barrera) who has dreams of becoming a fashion designer and the idea of abandoning his friends who have become family, who are fighting to maintain their community that is quickly becoming gentrified.

The film does a brilliant job of seamlessly intertwining storylines by showing the connectivity between its characters.

Benny, Usnavi’s best friend, dreams of owning his own business while currently working for a taxi service owned by Kevin Rasario (Smits). Rosario is the father of Benny’s long time on-again, off-again girlfriend Nina (Grace), the neighborhood genius who currently attends Stanford University. Rosario, a main staple of the community, secretly struggles with debt while attempting to pay for Nina’s tuition. Simultaneously, Nina struggles to live up to the high expectations of her father and the entire neighborhood that she loves.

Additionally, there are a number of supporting characters that add nuance to the film. The ladies of the local hair salon (Carla (Beatriz), Cuca (Polanco) and Daniela (Rubin-Vega) who always have their fingers on the pulse of everything that is happening, and Abuela Claudia (Merediz) who is the heart and soul of the community. All of the pressures that the characters are experiencing individually and as a collective come to a head, as the audience participates in the countdown to a blackout during a major heatwave.

There are several elements that make “In The Heights” sensational. It’s visually stunning and the music score is absolutely phenomenal! Audiences will experience all of the incredible music from the Broadway musical, plus a new bonus track entitled “Home All Summer,” written by Miranda and performed by Ramos, Grace and Marc Anthony.

The musical numbers paired with the breathtaking choreography by Christopher Scott, transport viewers directly to the streets of New York. There are elements of fantasy and whimsy along with moments that ground the audience with reminders that life at times is challenging, unpredictable and fragile.

The performances are amplified by the undeniable chemistry between the cast members. Each of the cast members has their own dream at stake in addition to the overall hopes to maintain their neighborhood, their sense of community and their homes.  The common thread… everyone is trying to find ways to achieve their dreams and through their love for Washington Heights and each other, they are able to see those dreams come to fruition.

“In The Heights” is truly an energetic, vibrant celebration of the importance of culture and community. The film will be in select theaters and available on HBO Max on Friday June 11… it is absolutely a must-see!