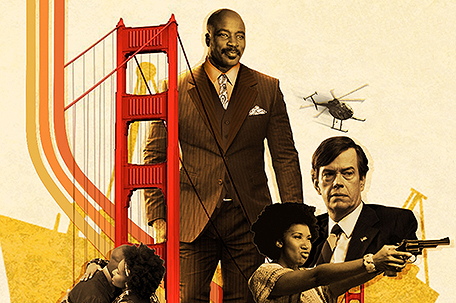 “Never, ever be afraid to make some noise and get in good trouble — necessary trouble.”

Charlie Walker, a trucking, and construction entrepreneur, lives his life by these words. Born in the south, Walker moved to San Francisco when he was a teen. With a desire to be his own boss, he eventually set up his own small trucking company, Charlie Walker Trucking. Boldness was evident in every fiber of Walker’s being — a characteristic rejected when it was presented in a Black body. Walker experienced racism in every facet of his life.

On January 19, 1971, two oil trucks collided in the San Francisco Bay spilling 800,000 gallons of crude oil into the water. That oil spill changed everything for Walker.

“I’m Charlie Walker” opens with a quote from James Baldwin, followed by a quote from Charlie Walker. “There is no moral distance between the facts of life in San Francisco and the facts of life in Birmingham,” Baldwin said in his quote. Baldwin makes it a point to acknowledge the illusion that racism was somehow diluted in San Francisco compared to racism Black people experienced in the south — which was not true.

Charlie Walker echoed the same sentiment, saying, “there is no difference between Mississippi and San Francisco if your face is Black.”

“I’m Charlie Walker” is set in 1971. During that time, there were protests happening throughout San Francisco opposing the Vietnam War. Additionally, racial tension was at a high after SFPD officer Alvin Johnson shot and killed Matthew Johnson, a teenager running away from the scene of a stolen car. The murder of Matthew Johnson led to the Hunter Point riots. Walker felt the aftermath of that racial tension and experienced pushback at every turn. No stranger to adversity, Walker remained unrelenting in his pursuit of the life he saw for himself.

In one instance, after repeated run-ins with Red McNulty (Travis Johns), who frequently refused him work, Walker informs McNulty, “I am one of those uppity Negroes looking to crash the party.”  During that interaction, Walker’s right hand man, Willie (Carl Lumbly), hooked the platform McNulty stood on to one of Walker’s trucks and it came crashing down. That altercation got Walker 30 days in jail. People attempted to discourage Walker and put him in his place often, but those attempts failed. White contractors looked down on Walker simply for being Black, which made it extremely difficult for him to find consistent work.

His wife, concerned about his ability to provide for their three girls, frequently encouraged him to return to laying brick, but Walker refused; the words did not resonate with him. When he had a goal in mind, there was nothing that could stop Walker. His persistence eventually got him a contract as the head of all of the Black truckers working on the beach to clean up the oil spill. This was unheard of with the other nonintegrated trucking companies at the time.

Unfortunately, the difficult task of cleaning up the oil spill was not the only challenge Walker faced. The oil company responsible for the spill tried everything in their power to stop Walker from thriving — including attempts to frame him with drugs and stolen money. Somehow, Walker always remained a few steps ahead of his adversaries and covered all his bases.

Walker continued to receive threats and intentional targeting at the hands of law enforcement and the court. In 1984, he was convicted of 23 felonies and served time in Folson Prison. In 1987, Walker was released from Folsom when an appeals court threw out his conviction on 17 charges of embezzlement.

“I’m Charlie Walker” ultimately is a story about overcoming and perseverance. When all the odds were against him, Walker always managed to escape the snares of his enemies.

Now at 88-years-old, Walker still resides in his Bayview-Hunter’s point hometown in San Francisco while continuing to thrive and live life on his own terms. Charlie Walker Trucking remains one of the most successful Black-owned and operated trucking companies in San Francisco’s history.

“I’m Charlie Walker” opens in select theaters and on VOD nationwide on June 10– it’s a must see!