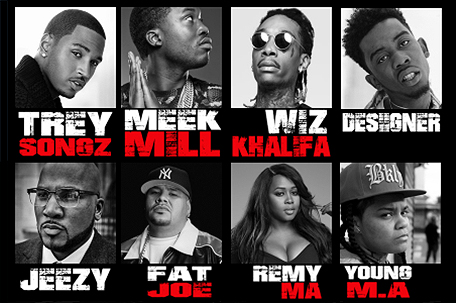 iHeartMedia’s Power 99, Philadelphia’s award winning home for Hip-Hop and R&B announced the return of POWERHOUSE 2016 (#PowerhousePhilly) on Friday, October 28 at the Wells Fargo Center, with a superstar line-up featuring performances from headlining artist, Trey Songz as well as Philly’s own Meek Mill, Wiz Khalifa and Jeezy.  In addition, the event will feature live performances by Fat Joe, Remy Ma, Desiigner and Young M.A with more artists to be announced.

The event will be hosted by the Power 99 on-air team and is presented by Fresh Empire and McDonalds “All Day Breakfast.”

“Powerhouse is an institution in the City of Philadelphia, and is one of the longest running urban radio shows in the country,” said Derrick Corbett, iHeartMedia’s Director of Urban Programming for Philadelphia. “We feel like the lineup we’ve assembled is star-studded and one that fully represents what’s happening in Hip Hop & R&B.”

The POWERHOUSE 2016 pre-sale will begin on Friday, September 9 at 10 AM via power99.iheart.com using the password: POWER.  Tickets will go on-sale to the general public on Saturday, September 10 at 10 AM via wellsfargocenterphilly.com.  For more information on this year’s biggest Hip-Hop and R&B concer, #PowerhousePhilly, visit Power99.iheart.com and follow Power 99 on Facebook at facebook.com/power99philly, Twitter at @power99philly, and Instagram at www.instagram.com/power99philly.

Fans can listen to Power 99 via the station’s website Power99.iheart.com as well as on iHeartRadio, iHeartMedia’s all-in-one streaming music and live digital radio service

iHeartMedia is a leading media outlet in the Philadelphia market.  Its radio brands and content are available across multiple platforms, including its broadcast stations, online via its branded digital sites, mobile, and social, with nationwide listening through iHeartRadio, the all-in-one streaming music and live radio service – with more than a billion downloads and 90 million registered users.

Artists and/or events subject to change or cancellation without notice.