Igniting change: Rapper Tone Trump is on a mission to give back to his city 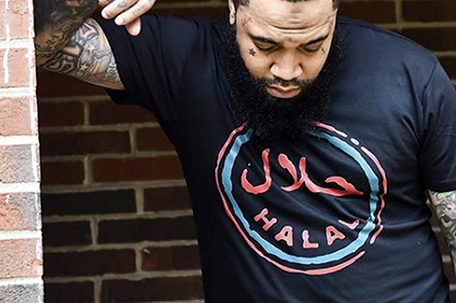 Fame can sometimes have a way of making people forget their humble beginnings. But that could not be farther from the truth for West Philadelphia’s own Tone Trump. The rapper, philanthropist, author and community leader has dedicated his life and career to empowering the City of Philadelphia – and his work has not gone unnoticed.

Tone Trump discovered his love for music after trying to find an alternative to the trouble that finds so many young people. The result was a successful career with over 50 million views online and a resume that includes work with some of the biggest names in the music business including: CeeLo Greene, Akon, Young Jeezy, Freeway and Birdman. Tone Trump was also featured as himself in the Oscar nominated blockbuster film “Creed” starring Michael B. Jordan.

Tone Trump has continued to find new ways to elevate and transform his life and career. With an upcoming album and documentary, a book and a number of other endeavors in the works, he always finds time to prioritize giving back. Tone Trump spoke with The Philadelphia Sunday SUN about his love for Philadelphia and his desire to change the world for the better.

Changing the world for the better requires understanding the importance of giving back… a concept Tone Trump has always embraced.

“Even when I was doing negative things in the streets, I always had a give back spirit because that’s how I was raised by my mother.” Tone Trump said, “As I developed my platform it was a natural transition, I just want to be remembered for something more than rapping, being cool and dressing nice. I want to be known for rebuilding and not destroying.” He added, “the joy you get from that… there’s nothing you can do in music, or sports that can compare to doing humanitarian work.”

Equally dedicated to his Muslim community, Tone Trump shared the part that his faith plays in the work he does.

“As a Muslim man, I believe that my deeds are the only thing that I can take with me. The first half of my life, I did a lot of wrong. Before my Lord calls me, I want to stack up a bunch of positive things.” He said.

Tone Trump has dedicated a great deal of his time to providing resources for the homeless. One of his annual efforts is a sock drive.

“The sock drive is something that I started five years ago. I wanted to do something different”, he explained. “I saw a quote on the internet that said socks were the least donated item in homeless shelters. I felt like God led me to that quote and it became my calling. The first time we did it, I got two bags of socks with a couple hundred pairs. I took them to Families Forward shelter in West Philly. Leading up to the last year that we did it, we got 20,000 pairs of brand-new socks and had corporate sponsors. Fast forward to this year, in the month of February, we’re on pace to receive 100,000 pairs of socks. Odd Sox, Karen Civil, Halal restaurants and people from all over the world have fallen in love with this project and helped me and I can’t thank them enough.”

In addition to the work that Tone Trump does in his West Philadelphia neighborhood and the greater Philadelphia community, he has taken his desire to give back globally. In partnership with Muslims of the World, Tone Trump recently traveled to Kenya on a mission trip.

“That trip changed my life. We went out there to do cataract surgeries. The surgery only costs $100 US dollars, but the people over there live off of one to two dollars a day. The first time we raised over $300,000 in four days and we were able to get thousands of people surgeries. I was literally there removing bandages from people’s eyes. Imagine that feeling, the first thing someone seeing is you… we were crying more than the people.”

He adds, “Last month during the pandemic, I had a chance to go back and we did cataract and hearing aid surgeries. On this trip, I got to see a little girl who had never heard her parents’ voices because of a $60 hearing aid that she initially couldn’t afford. The smile that she gave when she heard her daddy’s voice… I’ll never forget it.”

The latest addition to the positivity of Tone Trump’s brand, is a self-help book he co-wrote called “Big Halal Steppas.” He wrote it with the intention of educating a younger demographic of Muslim brothers.

“A lot of the younger rappers were saying they were big steppers. Halal in Arabic means permissible. So, I’m saying in a positive way, I’m still big stepping.  It’s a self-help book where I give out seven steps to live a bossed-up life. These are things I did in my life that took me from standing on the corner, to traveling around the world and being able to take care of my family. I wrote with an aspiring scholar who used quotes from 1,400 years ago from the Holy Koran and the prophet Muhammad, to explain everything I was saying from a street, barber shop perspective.”

Additionally, Tone Trump is planning to create an alternative education center on 52nd and Market, where young Black Muslim boys can come to learn everything from firearm safety and training, to financial literacy and real estate. The programs will either be affordable for all or free. Tone Trump also plans to run for City Council at Large, as a Libertarian, with the intention of igniting radical change in his community.

Be sure to lookout for Tone Trump’s latest music project — an album and documentary entitled “1 Foot In 1 Foot Out.” His book “Big Halal Steppas” is currently sold out, but he’s releasing an additional exclusive digital and audio version in partnership with the THE FIELD app… a Black owned app that promotes black businesses. You can follow and support Tone Trump on social media @tonetrump. For more details, visit his website www.247Trump.com.

The Next Mission: A.M.E Bishop Richard Franklin Norris is leaving the city that been his ancestral and ministerial home

“It’s About Life”: Community Give Back event held at Philadelphia Masjid