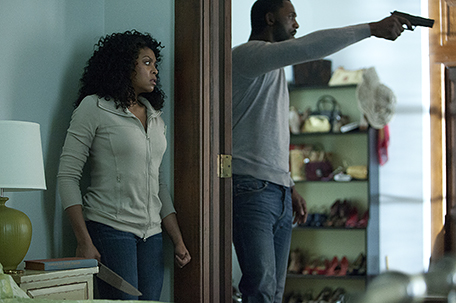 I started to get worried when, last fall, for a third time, Sony/Screen Gems pushed back the release date for the Will Packer-produced thriller No Good Deed, which stars Idris Elba and Taraji P. Henson.

And then the studio, once again, moved the film’s release date, pushing it back by another five months, to September 12, 2014, which is where it currently stands. I don’t expect that the date will be moved again.

Reasons for all the date shifting? That’s above my pay-grade, unfortunately, folks, so I’m useless here!

All I can do is speculate since I don’t have a direct (or even an indirect) line to Screen Gems brass.

Even though this many moves typically suggests danger to me, I will posit that, the most recent shift could be due to the other films that were scheduled to open on the previously-set April 2014 date – films whose release dates weren’t set at the time that the push-back from January to April, 2014 was made public. Studios have to ensure that their films are given the best placement, to put them in a position to do well.

But Will Packer certainly knows his audience, and how to reach them, as he’s proven with past films – most recently Think Like A Man and Ride Along, which were both immensely successful for the studios releasing them, so maybe there’s nothing to be concerned with here.

I just hope that this isn’t another We The Peeples, which Lionsgate pushed back about the same number of times, before finally settling on a date and sticking to it – something that I believe hurt the film at the box office.

No Good Deed, which stars Idris Elba and Taraji P. Henson, centers on a former District Attorney, and mother of two young children (Henson), kidnapped and terrorized by a handsome but mysterious stranger (Elba), who she lets into her home to wait for help, after his car runs off the road nearby. The movie trailer gives us more background on Elba’s character, which sets up the events that follow.

Mexican starlet, and the reigning queen of telenovelas, Kate del Castillo and Henry Simmons, round out the film’s starring cast.

Check out the intense first trailer for the film on YouTube https://www.youtube.com/watch?v=VjLVZ4BxOSI ; because based on what I see here, I say that Mr Elba should consider playing more villains.