‘I can’t be the only one’: Docuseries on ‘Women Who Rock’ 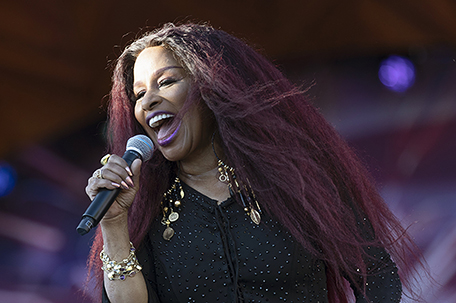 ABOVE PHOTO: Chaka Khan performs during rehearsals for the annual Fourth of July Boston Pops Fireworks Spectacular in Boston on July 3, 2022. Khan is one of many female performers featured in the four-part docuseries “Women Who Rock” starting Saturday on Epix. (AP Photo/Michael Dwyer, File)

NEW YORK — As a percussion protégé growing up in the Bay Area, Sheila Escovedo would ask visiting bands if she could sit in. She was often told to beat it.

She and other women in rock have faced similar disbelief and hostility.

“I think that the common thread for women in general, and especially being in the music business is really staying true to who you are and allowing that to be OK,” she said.

“I loved hearing the other women talk about their experiences,” Hendryx told the AP in an interview. “There’s just so many who are standing on the breasts — I was going to say shoulders — of many women who have come before them and fought battles that they didn’t even know they were fighting.”

The docuseries moves chronologically from the birth of rock ‘n’ roll, where women weren’t taken seriously, to the present day, where they’ve seized both production credits and technology to blaze their own independent paths. It’s been an uphill climb for most.

“In the business of entertainment, I think women have classically been relegated to being second-class citizens who don’t have a whit of their own opinion about anything,” Wilson says in an interview. “So they have to be shaped, informed and told how to look and how to behave and how to sound.”

Heart — led by sisters Nancy and Ann — brushed off such behavior, leaning on their blood and their military background for strength, blazing a path in a male-dominated space with songs like “Barracuda” and “Alone.” Sheryl Crowe in the series says Wilson was a beacon of how to rock and maintain your femininity.

“We had this kind of almost a regimented concept that we could just do it. There would be no resistance,” says Nancy Wilson, touring this summer as Nancy Wilson’s Heart. “We were just able to do it. We were young enough and good enough already at a very young age not to be convinced that what we were was inappropriate.”

It may come as no surprise that Staples kicks off the series. At the fulcrum of gospel, blues and R&B, she is the connection between Mahalia Jackson and Bob Dylan, Prince and Norah Jones. The fact that Staples was onboard helped convince others.

“There are few folks whose voices were so integral to sound-tracking change in America as Mavis. And so getting to start with Mavis really kind of set a bar for how we moved through the rest of the series,” said Hopper.

The show highlights a makeshift sisterhood of artists, with Mary Clayton mentored by Odetta, Hendryx mentored by Nina Simone, and Khan reaching back to Staples. “Each of these women really provides a rung for the women that we meet next,” said Hopper, a music journalist before moving on to directing and producing documentary work.

The series explores the rise of men and women onstage together in bands like The Pretenders, The B-52s, Talking Heads and Blondie, and the music industry’s exploitation of Black artists, from gospel to disco. Audiences see how the MTV revolution in the 1980s prized image and the later arrivals of solo superstars Twain, Lady Gaga and Beyoncé.

In the second episode, which deals with the 1970s, stars like Joni Mitchell, Carole King and Stevie Nicks are described in the context of the Equal Rights Amendment and Ruth Bader Ginsburg. The episode explores the importance of the punk club CBGB and how Patti Smith seemed to announce a world beyond gender, while Blondie’s Debbie Harry added glamour to punk. “As far as I’m concerned, Debbie Harry invented cool,” says St. Vincent in the series.

Joan Jett recalls begging her parents for a guitar and finally getting one at 13, spending the first days trying to bend the e-string over and over. She asked her dad to teach her rock ‘n’ roll, but he replied that girls don’t do that. Instead, he tried to teach her “On Top of Old Smokey.”

“I wanted to be holding a guitar and owning it the way the Rolling Stones do,” Jett says in the series. Along the way, she kept thinking to herself: “I can’t be the only one.” She wasn’t.

By 16, Jett was in the pioneering female band The Runaways. But the industry never made it easy, constantly putting up roadblocks and saying “You’re not allowed.” For Jett, “That killed me.”

Wilson feels the progress that women made in the ’70s stalled as MTV took hold and has only built back since the 1990s, pointing to such acts as Phoebe Bridgers, Wet Leg, Lucius, Sharon Van Etten and Angel Olsen — or, as she puts it, “girl players out there who are really taking no prisoners.”

The sisterhood helped and so did the democracy of technology, allowing all artists the skills to engineer, produce and craft their music, bypassing the traditional gatekeepers. Another artist featured is Oakland singer-songwriter Star Amerasu, a trans musician who makes her living through Patreon, a crowdfunding platform.

Shelia E. is also trying to encourage the next generation of women musicians. She surfs the internet at least once a week, cheering young people and especially young girls.

“I send them a message on Instagram or Facebook and say, ‘Hey, keep doing what you’re doing. I’m a fan. You’re amazing. Please tell your parents they’re doing a great job,’” she said.