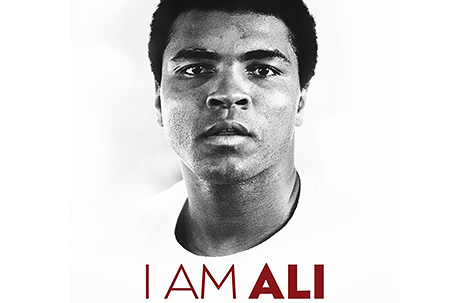 Rambunctious. Intense. Pretty.  These are just some of the words one might use to describe a legend of this man’s caliber.  No matter the age, everyone knows who ‘The Greatest’ is, and instantly associates the phrase with a man who ruled the boxing ring for over twenty years.  Most don’t know the multi-faceted story behind the legend.  Director Clare Lewens goes beyond the ring for I Am Ali.

This documentary unfolds the many sides of the Kentucky native including: family man, father, brother, celebrity, friend, and fighter in a way that audiences have never seen before.  There are many personal aspects to this film including lots of home videos, tape recordings, and photos of his parents, brother and children as they were growing up over the years.

The film starts at the very end of his phenomenal career in an archived phone conversation with manager Gene Kilroy; into the genesis as a 12 year old who wanted to fight to get his bicycle back.  From this point forward we learn of Muhammad Ali, formerly Cassius Clay, through a series of vignettes broken down by important character witnesses in his life: brother Rahaman, daughters Maryum and Hana, journalist Ken Jones, trainer Angelo Dundee, manager Gene Kilroy, son Muhammad Jr., ex-wife Veronica Porche, fan Russ Routledge and a slew of other familiar faces fortunate enough to have known who the pretty prophet really was.

Throughout the duration, his love of people, deep involvement in his children’s lives, the jokester side, and his sincere passion for the greater good are repeatedly mentioned.  We see the giant as a comic, exile, Muslim, and vulnerable perfectionist.

I Am Ali is heartfelt, emotional, and highly personal making it a cinematic treat.  People have never gotten a glimpse into Ali as a whole from all sides of the spectrum.  Cinematography from Stuart Luck was classic and superb, and the soundtrack by Roberto Cappannelli (The Intouchables) makes nodding your head a necessity.

Former heavyweight champion Mike Tyson said it perfectly, “every head must bow, every tongue must confess, Muhammad Ali is the greatest.”  Years from now, children will watch this film and have a great appreciation for the athlete and man who chose to be known as worthy of all praise and the most high.

Muhammad Ali: The Long-Lost Movie Documentary gives glimpses of The Greatest in ’73 & ‘74