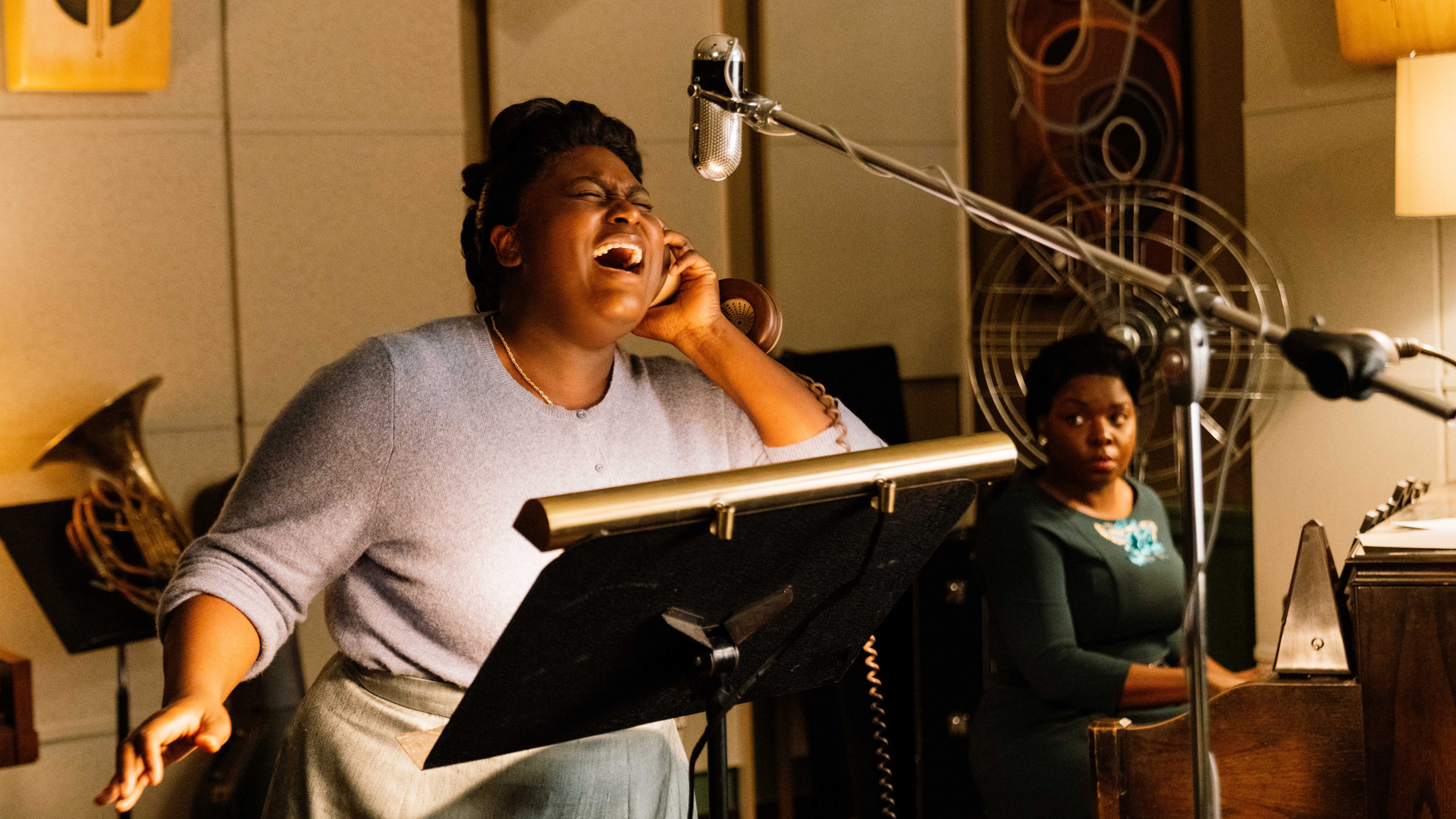 Who among us hasn’t been touched by the music of Mahalia Jackson? While you may not realize it, the self-taught “Queen of Gospel” and civil rights activist inspired some of the most popular music genres in the United States, such as R&B, soul and rock and roll. Legendary musicians like Little Richard, Aretha Franklin and Ray Charles have cited her as a prominent influence on their work, while Mavis Staples dubbed her “the greatest gospel singer that ever lived.”

Despite music executives’ pleas for her to record secular music, specifically blues, Jackson stayed true to her roots, becoming a sensation through her moving renditions of gospel songs.

Robert F. Darden, professor of journalism, public relations and new media at Baylor University and former gospel music editor for Billboard magazine, tells MyLifetime.com that the singer believed her vocal gifts came from God, “and therefore, should only be used in God’s service.”

“That unshakable belief provided the moral foundation that enabled her to resist calls to sing in nightclubs, or even arenas, and record overtly pop music, jazz or the blues,” he says.

Darden, who also directs Baylor’s Black Gospel Music Restoration Project, says that while Jackson’s music was rooted in the Baptist Pentecostal music she was exposed to during her upbringing, her slightly rebellious childhood in New Orleans introduced her to blues and jazz stylings. “She often acknowledged the influence of the Bessie Smith 78s she smuggled into her house,” he says.

Nevertheless, Jackson’s most legendary performances and songs are bonafide gospel songs. She’s most admired for the subdued yet powerful “Take My Hand, Precious Lord,” and “Move On Up A Little Higher,” which was inducted into the Grammy Hall Of Fame in 2012.

By staying committed to her traditional church roots, Jackson broke artistic barriers; she is the first gospel singer to perform at Carnegie Hall in 1960, and was posthumously inducted into the Rock & Roll Hall of Fame in 1997. Her passionate approach to her craft awakened the hearts and spirits of saints and sinners alike, and brought international interest to gospel.

“There’s certain women whose talent is so great that they can sing ‘Happy Birthday’ every day and people still love it,” actress and singer Danielle Brooks tells MyLifetime.com. Brooks, well-known for her role as Taystee on the Emmy-winning show “Orange Is the New Black,” portrays the gospel icon in Lifetime’s Robin Roberts Presents: Mahalia, that aired on Saturday, April 3

The 31-year-old Juilliard-trained artist nabbed a Tony Award nomination for her role as Sofia in the 2015 Broadway revival of The Color Purple as well as the 2017 Grammy for the Best Musical Show Album for the same production. But Brooks believes Jackson is the person she was “destined to play,” based on the stark parallels of their lives as Southern-bred, churchgoing Black women.

And while portraying an inimitable figure like Mahalia Jackson is no small feat, Brooks says she was up for the challenge, placing reverence for the iconic vocalist at the forefront of her depiction, especially when it came to Jackson’s performance abilities.

Brooks says she aimed to connect with the message behind gospel songs in order to feel what Jackson felt. On stage, Jackson was often overcome with intense emotion, and her tendency to shake, cry and drop to the floor while singing became a hallmark.

“Mahalia was so much more animated and made bolder choices than I ever had on stage,” Brooks says. “She’s very much in the spirit. How deep in the spirit is she? Where is it coming from? Why does somebody feel the need to get down on their knees? Why does somebody feel the need to jerk their head back? What gets her to the point where her wig is about to fall off? I never want to imitate someone just because they did it. [I want to find] the details of that person through the inner life that has to be there. I’m trying to get to that same place for my wig to come off!”

“Then and now, Jackson [has] come to epitomize the look, the sound, the ethos, the passion of Black gospel music,” Darden says of Jackson’s widely lauded stage performances.

“To me, what stands out—beyond that once-in-a-lifetime voice—is the passion. She sang every song as if God alone was listening…that anything but her best would have been a mortal sin. You can see that love in her face as she sings, even as you can hear the emotion in her voice.”

In addition to her clear vocal gifts, civil rights and activism are two major components propelling the icon’s life—and—biopic forward.

The film’s premiere date marks the 53rd anniversary of the assassination of Jackson’s friend, Dr. Martin Luther King Jr. She performed at the 1963 March on Washington where Dr. King gave his famous “I Have A Dream Speech,” and also at a service to commemorate his life after his 1968 assassination. Brooks explains that Jackson’s civil rights experiences are not only integral to her story, but important to the story of America—especially today.

“I heard someone say once that music is the second strongest thing after prayer,” she says. “I think [Jackson] tried to bring a lot of joy within the civil rights movement, because so many people were hurting… With music, it cuts through to people’s core, into their heart, and they’re able to open up their mind to the possibility of change.”
“The late Rep. John Lewis once told me, ‘Without music the civil rights movement would have been a bird without wings…’” Darden, who has written books on the intersections of the music and civil rights, says.

“With music, it cuts through to people’s core, into their heart, and they’re able to open up their mind to the possibility of change.” – Danielle Brooks

“Activism and Black music– sacred or secular–are forever inextricably intertwined…this music, these songs continue today, not just in the Black Lives Matter and #MeToo movements, but in the songs and actions of oppressed people around the world who continue to sing them.”

Spreading the importance of gospel music was one of Brooks’ main goals while filming.

As present-day America continues to experience social, racial and medical concerns, she believes that gospel music is helpful for those of us who “desperately need healing” in our everyday lives. “[Jackson] said ‘gospel is the cure for the blues,’ and I think what gospel music provides is joy and hope,” Brooks says.

“Gospel music is one of the very few genres that is defined more lyrically than musically,” Darden explains. “For someone who believed and tried to live her faith as ardently as Mahalia Jackson, singing songs that accurately reflected that belief is as good as it gets. The great gospel singers were a combination evangelist, preacher and entertainer…that light always shone on Mahalia’s face, even in her painful later years.” (Jackson was plagued by health issues and passed away at 60 from heart disease.)

Brooks says her crowning achievement in working on Robin Roberts Presents: Mahalia is having the privilege of lifting the spirit of Mahalia Jackson up. She’s hopeful that viewers will learn about Jackson, but the film is “really for her,” keeping her light alive, and her legacy intact.

“She left us so much already, and we still feel her through every civil rights movement that we continue to go through,” Brooks says. “I just want her to be proud, that’s what I prayed for.”