Horrors of slavery at center of Janelle Monae’s ‘Antebellum’ 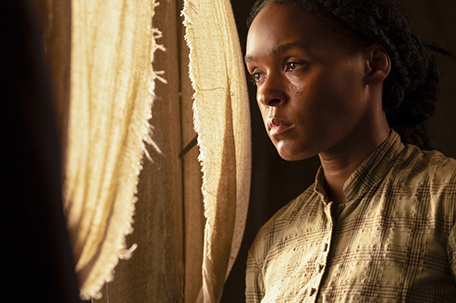 ABOVE PHOTO: Janelle Monae in a scene from “Antebellum.” (Matt Kennedy/Lionsgate via AP)

NEW YORK (AP) — Janelle Monae says she “felt so much rage and anger” when she stepped onto a former slave plantation for the first time to film the psychological thriller “Antebellum.”

In the movie, set for release Friday, the pop star and actress plays a successful modern-day author that finds herself trapped in alternate time periods, including the terrifying reality of a runaway slave. Remembering the moment she arrived on that plantation set, she becomes visibly emotional.

Much of the horror of “Antebellum” is in its unflinching depiction of the violence inflicted on slaves. Monae hopes the film acts as a catalyst for discussions about systemic racism in a politically divided nation. She says it’s essential to “confront the pain” of the past in order to understand the present state of Black Americans — and address police brutality and social injustice.

“You cannot talk about the present and everything we’re dealing with the police without knowing the past and understanding that in the South during the Civil War that the first police institution was the same slave patrol meant to control, meant to monitor free slaves, meant to kill, meant to discriminate against free slaves,” Monae said.

The movie grew out of a literal nightmare that co-writer-director Gerard Bush had after his father died. He awoke remembering “this woman, Eden, that was screaming desperately for help that felt like cross-dimensional in a sense.”

“I was really emotional from the experience. And I took out my notepad and took all of the notes from the nightmare,” Bush said.

Bush and filmmaking partner Christopher Renz say they used 1970s horror films as inspiration. They hope to unsettle audiences when depicting terrors of the pre-abolition South. The Oscar-winning 1939 film “Gone With the Wind” became a touchstone. Bush describes it as both a “horror film” and “a piece of really effective propaganda.”

“We went so far as to obtain the lenses from ‘Gone with the Wind’ to shoot our movie so that we could take that same weaponry that was intended to misinform, to correct the record,” Bush said.

Like many films this year, the pandemic has led to multiple delays in releasing “Antebellum.” Bush notes the significance of the settled final date: “We didn’t do it deliberately. But it just so happens that the date of September 18th is the anniversary of the Fugitive Slave Act of 1850,” he said.

Bush said he realizes that audiences will be uncomfortable watching the film, but he believes that unsettling times calls for unsettling art.

“We need to catalyze a national dialogue or advance the dialogue around this country’s original sin. I think that we’re going to need to confront it head on and dismantle the scaffolding that keeps these inequities in place so that we can build something new, more equitable for everyone,” Bush said.