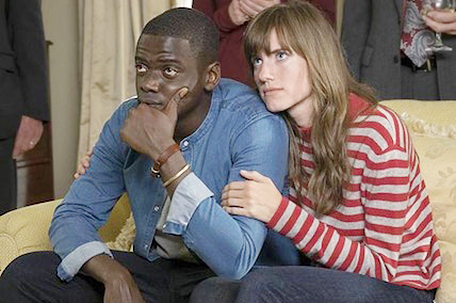 ABOVE PHOTO:  Daniel Kaluuya and Allison Williams as Chris and Rose in ‘Get Out’ closeup.

Horror and suspense films finally have a serious contender in the arena from one of the least likely places.  Jordan Peele, known for his comedic relief on shows such as “Mad TV” and “Key and Peele” tried his hand at writing and directing racially-themed psychological suspense thriller, “Get Out.”

Without giving too much away, the central plot develops through Chris Washington (Daniel Kaluuya), a Black man who is invited to meet his White girlfriend Rose Armitage’s (Allison Williams) parents over a weekend spent in a creepy suburban town with more than a few secrets.  Chris is initially worried when Rose informs him he is the first Black man she’s brought home to the family, and parents Missy (Catherine Keener) and Dean (Bradley Whitford) overcompensate to make him feel comfortable, only to stereotype and demean him to the fullest extent minus racial slurs.  Coming from an affluent background, the Armitage’s make their living as a psychiatrist/hypnotist and a neurosurgeon, and once we learn these facts, the drama picks up from there.

The opening credits brought a sense of excitement from the door as the senses are automatically heightened through expert use of music (Michael Abels) and cinematography (Toby Oliver).  That combined with thought-provoking camera angles and special effects take us on a psycho-trip journey reminiscent of genre greats Alfred Hitchcock and Stanley Kubrick.

The amount of subliminal and not so subliminal messaging in the dialogue creates authentic racial tension and puts us in Chris’ shoes as he navigates awkward and ignorant conversation.  He finds himself searching for commonality amongst the Black help, only to find they are watered down versions of the Black experience he is used to.  Aside from racial tension, Chris is met with challenges due to repressed memories from his past, the “Mandingo complex,” and assimilation.  He is forced to use his head and think outside of the box in more ways than one as he fights to keep his sanity intact amongst a group of crazy white folks.  All the while, childhood friend and TSA agent Rod (Lil Rel Howery) warned him not to go visit this family and ends up searching for clues to connect the dots to this twisted and tumultuous weekend getaway.

This film has been creating crazy buzz since the trailer first dropped in December of last year and it has yet to disappoint, leaving Jordan Peele laughing all the way to the bank.  The writer/director had a budget of $4.5 million and since February 24, opening day, the flick has been burning up the box office making a record $30 million with no signs of slowing down.  Black folks have been in the theaters in droves screaming and laughing at the action taking place before them.  This movie couldn’t be more timely for Black people, as it explains the tip of the iceberg in terms of emotional and psychological distress due to oppression.

There’s so much more that could be said about this thriller, but because I don’t want to spoil anything I’ll just encourage you to support the brother, buy some tickets, and stay till the very end credits as the role reversal and revenge is climactic to say the least!  Grab everyone you know and head out to catch this film, you really won’t be disappointed!  Free at last, free at last, thank goodness for a horror film that is effortless at being good and worth the watch!