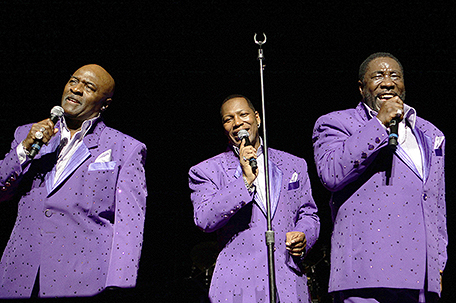 ABOVE PHOTO:  The O’Jays  (Photo by Raymond Boyd)

This January, ’70s soul crooners The O’Jays, will bring their favorite hits to Philadelphia. The Rock & Roll Hall of Famer inductees will entertain fans with their famous “Philly Soul” sound in the SugarHouse Casino Event Center on Saturday, Jan. 27, 2018, at 9 p.m. Tickets for the group’s performance can be purchased beginning Friday, Nov. 3, and cost $69-$89.

At the forefront of ’70s soul music, The O’Jays scored a string of pop and R&B chart-toppers including “For the Love of Money,” “Love Train,” and their first number one hit “Backstabbers.” Known for their distinctive and smooth sound, The O’Jays represent an era when the “Philly soul” style dominated the charts. With mass commercial appeal and international recognition, The O’Jays’ music is often heard in contemporary commercials, movies and television shows.

“We could not be more thrilled to have The O’Jays here at SugarHouse,” said Wendy Hamilton, general manager of SugarHouse Casino. “The O’Jays are an iconic group that delivers an outstanding performance and brings an exciting show to Philadelphia!”

Inducted into the Rock & Roll Hall of Fame in 2005, The O’Jays are one of the most celebrated groups in music history, with inductions into the Vocal Group Hall of Fame and the Official R&B Music Hall of Fame. The group’s career spans more than 50 years, and its success includes a collection of 10 Gold albums, nine Platinum albums and 10 number one hits.

Eddie Levert and Walter Williams, the group’s two original members, along with Eric Nolan Grant, who joined The O’Jays in 1995, continue to thrill audiences with fan-favorite hits and electric performances. The O’Jays’ Philadelphia performance will offer fans a special concert experience, as the group that helped make the “Philly Soul” genre famous returns to the city where it all started.

Tickets for the group’s show, and for all SugarHouse performances, including Engelbert Humperdinck (Nov. 3), Kenny Wayne Shepherd Band (Nov. 10) and Michael Bolton (Dec. 12), can be purchased on the SugarHouse Casino headliner concerts page.

In addition to live performances and concerts, the SugarHouse Casino Event Center can be reserved for a variety of occasions, including weddings, corporate receptions, seminars, trade shows and more. The space features floor-to-ceiling windows and panoramic views of the Delaware River waterfront and the Ben Franklin Bridge. Parking is always free.