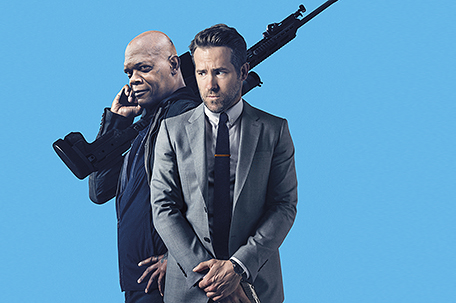 World-class bodyguard Michael Bryce’s (Ryan Reynolds) services were in great demand when a Japanese tycoon (Tsuwayuki Saotome) was executed on his watch. That botched operation ruined not only his professional reputation, but also his romantic relationship with Interpol agent Amelia (Elodie Yung). In fact, his career took such a hit that a couple of years later we find him homeless and reduced to chauffeuring clients around in a beat-up jalopy for a fraction of his former fee.

A shot at redemption and at winning back the object of his affection arrives when Amelia surreptitiously approaches him for help protecting Darius Kincaid (Samuel L. Jackson). He’s the key prosecution witness in the trial underway at the International Court of Justice of Vladislav Dukhovich (Gary Oldman), an Eastern European dictator accused of committing genocide.

Amelia has determined that there’s a mole inside of Interpol who has compromised Kincaid’s safety. So, the only hope of getting him to court alive is by hiring someone outside the organization.

Trouble is Darius is no altar boy, but a vicious hit man who has murdered hundreds of people. Despite being disgusted by the assassin’s grisly resume, Michael grudgingly agrees to escort him from a British prison to The Hague where he’s scheduled to testify in less than 24 hours. In return for his cooperation with authorities, Darius bargained for the release of his wife Sonia (Salma Hayek) who is herself sitting behind bars for slitting a guy’s throat in a gruesome bar fight.

That is the point of departure of “The Hitman’s Bodyguard”, an unlikely-buddy comedy directed by Aussie Patrick Hill (“The Expendables 3”). Superficially, the film unfolds like a high-octane, action adventure where a pair of protagonists prove to be impervious to harm from bullets, explosives, pyrotechnics or boat and car crashes.

The production works primarily because of the palpable screen chemistry generated by veteran thespians Samuel L. Jackson and Ryan Reynolds. However, it does help immeasurably that each of these indestructible characters has been somewhat humanized by their vulnerability to a fetching love interest.

But the guys mostly exchange lighthearted barbs while having a close brush with death every other minute or so as they negotiate their way through a neverending gauntlet of bloodthirsty goons.

An eye-popping, stunt flick chock full of implausible fight and chase scenes orchestrated in accordance with the laws of cartoon physics.

To see a trailer for The Hitman’s Bodyguard, visit: https://www.youtube.com/watch?v=F4Afusxc2SM