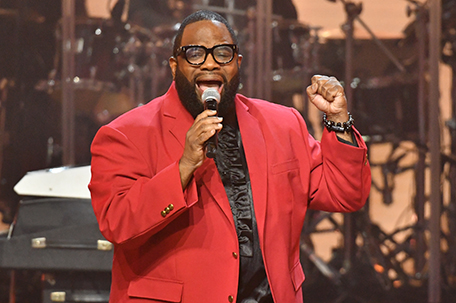 LOS ANGELES — Hezekiah Walker became a student at Virginia Union University two years ago, but the Grammy-winning gospel singer took his collegiate experience to the next level by opening a gospel music center on the campus.

He will lead the Hezekiah Walker Center of Gospel Music at Virginia Union University, in Richmond, Virginia. It’s being dubbed as the first academic center focused on gospel music at an historically Black college or university where students can learn the cultural and business aspects of the genre and industry.

Walker said the center — which opens in Spring 2022 — would provide a tremendous outlet to “house our music.”

With help from the school’s administration, Walker will curate the center’s curriculum geared toward aspiring songwriters, instrumentalists, vocalists, producers, managers and publicists within the gospel realm. He said the school will teach students primarily about gospel music unlike any other college.

Two years ago, Walker decided to return back to school. He spent some time researching universities who are known for their theological seminary schools and found that Virginia Union, a private Black university, had one of the best in the country.

After registering, Walker was accepted into Virginia Union’s Samuel Dewitt Proctor School of Theology, where he’s currently a second-year student. But when the renowned gospel singer initially stepped on campus, he was mostly incognito sporting his hat backward with sunglasses.

But Walker’s moment of obscurity lasted for a couple months until he met with Virginia Union president Hakim J. Lucas. The gospel singer said Lucas was unaware he was a student until a faculty member informed him.

Initially, the conversation was about Walker performing in a concert. But the two came up with the grand idea to create a gospel music school and convert one of the buildings on campus into the center, which will don Walker’s full name.

“Gospel is a part of the legacy and story of the journey of Black spirituality, Black social justice and Black religion,” Lucas said. “If we’re going to be serious as an institution, committing ourselves to the empowerment of Black people, you have to create a way to study all of these institutions.”

Lucas said the university felt compelled to embrace gospel because “we understood the academic roots of the music.”

Walker is known for gospel songs such as “Souled Out,” ”Every Praise” and the Grammy-nominated “Better.”

He believes his center can help up-and-comers who are willing to take pride in uplifting the genre, which he thinks is disconnected from other areas of the music industry. He said exploring the history and milestones of the genre — like the first time a gospel artist won a Grammy or received a big royalty check — are important to help students appreciate those who paved the way for them.

“We need to teach our people so they can understand it,” he said. “Then they can appreciate where we are today and where we’re going as we look back to where we come from.”

While Walker preps for the gospel center’s opening and continues as a student, he’s also working on a new album, which he expects to release in October. He worked with Teddy Riley to create a song with a New Jack Swing vibe meshed with inspirational messages.