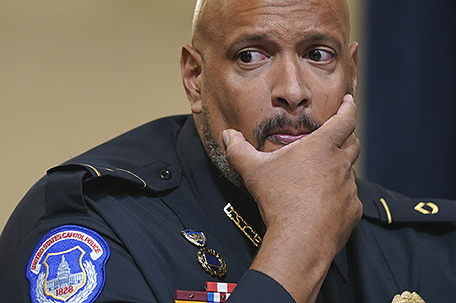 NEW YORK — People who watched the first day of a House investigation into the Jan. 6 uprising at the U.S. Capitol lastTuesday were exposed to the sort of blunt language, including profanity and racial slurs, rarely heard on daytime television.

The hearing featured emotional testimony from four police officers who defended the Capitol and video clips of violence and mayhem. It was shown live widely, but not uniformly, on several television networks.

Capitol Police Officer Harry Dunn, who is Black, said one rioter cursed him and called him the n-word, a phrase that was repeated and even chanted at him. Dunn didn’t mask any language while describing it. Networks warned of graphic material in onscreen messages.

In initial accounts of Dunn’s testimony, The Washington Post, The New York Times and The Associated Press all mentioned the slur but did not spell it out. CNN’s website linked to a video with the headline, “Capitol police officer recounts rioters calling him the n-word.” The video itself, after warning of graphic language, used Dunn’s full quotes.

Cable networks CNN, Fox News Channel and MSNBC carried the hearing, lasting more than three hours, in full. ABC pre-empted daytime programming to air most of it but not CBS and NBC. Instead of compelling their local stations to carry it, those networks said it was optional.

It wasn’t immediately clear how many CBS and NBC stations chose to air it, but those in the New York and Los Angeles markets did not.

Television executives argue that consumers have many more options to see such events than they did years ago, including live streaming.

“The fact is, people don’t go to broadcast television for live, breaking news the way they used to,” said Mark Lukasiewicz, who ran NBC News’ special events unit until 2017 and is now dean of the School of Communication at Hofstra University.

Still, there’s no better way to catch a casual viewer’s attention and signal an event’s importance than to broadcast television special reports.

Some Republicans, like House Minority Leader Kevin McCarthy, have minimized the investigation as being partisan. So it was noteworthy that Fox News Channel, the favored destination for many Republican viewers, aired last Tuesday’s testimony.

While onscreen chyrons occasionally reminded viewers that the investigatory committee was “Pelosi-selected” and “Dem-led,” the network stuck with the hearing through the question-and-answer period until the end.

Fox’s Bret Baier said the hearing was an “eye-opener” for anyone who considered Jan. 6 a non-violent protest.

“You cannot watch this testimony and say that it’s not a big deal,” he said.