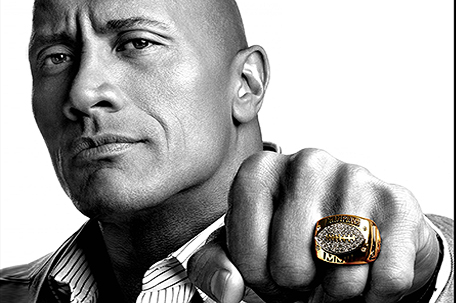 Is it too early to say the summer of 2015 belongs to Dwayne “The Rock” Johnson?

Not only did the beloved athlete-turned-actor kick off the summer movie season early with the billion dollar blockbuster Furious 7, continue it with the mega-disaster pic San Andreas, and with the new HBO comedy “Ballers”, a story about a retired football player making a life transition that’s tailor-made for his charismatic strengths.

Looking at the lives of former and current football players, “Ballers” follows former superstar Spencer Strasmore (Johnson) as he gets his life on track in retirement while mentoring other current and former players through the daily grind of the business of football. Rob Corrdry, Omar Benson Miller, John David Washington, Donovan Carter, Troy Garity, Jazmyn Simon and Arielle Kebble also star.

The “Entourage”-meets- “Hard Knocks” series continues its 10-episode season on Sundays at 10PM.

‘Ballers’ looks at humor, drama in the lives of pro athletes