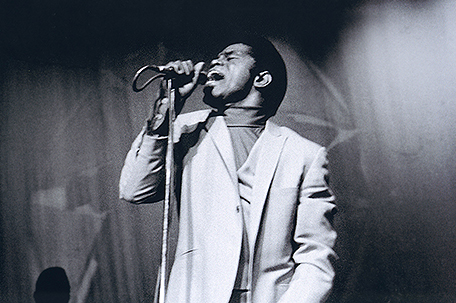 Charting his journey from rhythm and blues to funk, Mr. Dynamite: The Rise of James Brown features rare and previously unseen footage, interviews and photographs, chronicling the musical ascension of “the hardest working man in show business,” from his first hit, “Please, Please, Please,” in 1956, to his iconic performances at the Apollo Theater, the T.A.M.I. Show, the Paris Olympia and more. Directed by Oscar® winner Alex Gibney and produced by Mick Jagger, the feature-length documentary was made with the unique cooperation of the Brown Estate, which opened its archives for the first time, and debuts Monday, Oct. 27 (9:00-11:00 p.m. ET/PT), exclusively on HBO.

Abandoned by his parents at an early age, James Brown was a self-made man who became one of the most influential artists of the 20th century, not just through his music, but also as a social activist. In addition to extensive historical footage, including archival interviews with Brown himself, the film includes modern-day interviews with Mick Jagger, who remembers first seeing Brown perform from the balcony of the Apollo Theater; Rev. Al Sharpton, who met Brown at age 17 and considered him a father figure; band members Maceo Parker, Clyde Stubblefield, Melvin Parker, Alfred “Pee Wee” Ellis, Martha High, Bootsy Collins and Fred Wesley; Danny Ray, Brown’s MC, who shrouded the singer with a cape onstage; Questlove, founder of and drummer for The Roots, and a disciple of Brown’s “on the one” rhythm; rapper Chuck D. of Public Enemy; jazz musician Christian McBride; and tour manager Alan Leeds, among others.

Mr. Dynamite: The Rise of James Brown covers such key subjects in the life and career of the Godfather of Soul as:

–His early friendship with singer Bobby Byrd following a stint in jail for stealing clothes. After joining Byrd’s band, he transformed the group into James Brown and the Famous Flames.

–The influence of superstars Louis Jordan and Little Richard. Before his own success, Brown was hired to impersonate Little Richard on tour.

–His first hit, “Please, Please, Please,” and the evolution of his signature stage routine, in which MC Danny Ray draped a cape over the seemingly spent Brown, only to see the miraculously revived singer throw it off.

–Brown’s appearances at Harlem’s Apollo Theater, where he recorded his breakthrough live album in 1962.

–His legendary performance at the T.A.M.I. Show in 1964, when he upstaged the Rolling Stones and the Beach Boys.

–Brown’s civil rights activism, including a 1966 concert in Jackson, Miss. following The March Against Fear.

–His powerful effect on the black community at a 1968 Boston concert, when he calmed the city in the wake of Martin Luther King, Jr.’s assassination. The footage, previously thought lost since it was first broadcast in 1968, is shown for the first time since then.

–Brown’s endorsement of Richard Nixon in the 1972 presidential election, which cost him fans and influence.

–His enormous influence on future musical trailblazers, including Prince and Michael Jackson. Brown’s records were often mined for beats by the fledgling rap movement, especially the 1970 single “Funky Drummer.”

Mick Jagger states, “We had full access to amazing never-before-seen photos and video from James Brown’s estate, which Alex Gibney used brilliantly to tell the story of James’ career from its inception through its pinnacle. We spoke with the extraordinary people who knew James well and worked alongside him throughout his career. By hearing their fascinating stories and memories, we were able to paint the full picture of James as both a musical artist and social activist, whose legacy and impact on the music industry is ever-present.”