“Harriet”: A Discussion With director and writer Kasi Lemmons 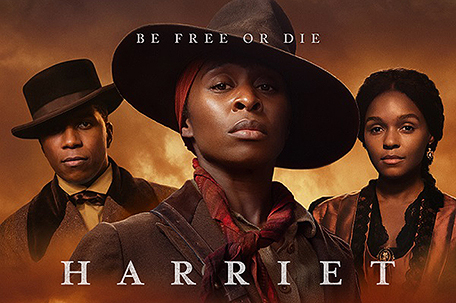 Kasi Lemmons began her career with a love for acting. After studying acting for years, her passion eventually birthed another gift… writing.

Lemmons made yet another career shift with her feature film directorial debut “Eve’s Bayou” in 1997. She went on to direct “The Caveman’s Valentine,” “Talk to Me,” and adapted the Broadway musical “Black Nativity” to film.

Kasi Lemmons spoke to the SUN about the journey to create “Harriet.”

“Harriet” tells the story of Minty, a slave who beats all odds on her quest for freedom before also freeing hundreds of other slaves via the Underground Railroad.

Lemmons shared her joy in working with this cast.

“Cynthia Erivo is such a star, but she’s also a real actor,” she said. “What I love about her is not only was she prepared in every way you could possibly be prepared to play the role, but she’s good enough to get out of the way of the role. You see actors try to work the role, she didn’t work the role. She let Harriet come to her, and you have to prepared to do that. She never looked in the mirror, she never asked to see the monitor, she was just there and available… she’s amazing.”

“I love them [the cast] very much as people which is helpful when you’re doing difficult material, it’s great to have great people,” Lemmons added.

The turmoil that Harriet Tubman endured on her quest for her freedom is not easy material to cover. Shot in Richmond, Virginia in the fall, Lemmons shared her experience with one of the most challenging scenes in the film, where Harriet Tubman rescued her family by crossing a river.

“It was extremely hard on a lot of different levels,” Lemmons said. “It was very cold. I was worried… it’s hard not to worry about your actors. The day before there’s this wonderful, but very short scene in the movie where the freedom seekers are running; it’s dusk and it’s a beautiful shot. As soon as I say action, they run into a hive of ground bees.

The bees start flying up their period clothing and getting caught in their clothing,” she continued. “So, they’re stripping off, being stung and then these angry bees, kind of regroup and attack the crew — there’s hundreds of them and everybody gets stung. One of the actors got stung about 17 times. We sent him to the hospital, and he was fine but he did not enjoy the great outdoors. The very next night, we’re walking into the water. You don’t know everything that’s in there, it’s freezing cold and they’re out in the marsh before they walk in. So, I was worried about them. You don’t want anybody to get hurt. You make things as safe as you possibly can. We had wonderful people around to make sure that things were safe.”

“Cynthia did 99% of her own stunts and she wouldn’t wear a wetsuit,” she said. “She wouldn’t wear a wetsuit because she was so in character that she wanted to feel cold. That was extremely hard for me to watch. I’m on a boat in the middle of the water shivering, and she’s got to walk into the water from the shore to the boat. She only did it once. We were clear and she was clear.  Dhe said ‘I’m only going to do this one time and it’s going to be good.’”

“Harriet” does an incredible job of presenting the heroism of Harriet Tubman, while simultaneously humanizing her. The film also highlights Tubman’s spiritual gifts, which many of us never learned about.

“When I was digging into the research — over and over again, you can’t avoid it — that’s the story. So I said, ‘why doesn’t everybody know this?” You’ll see it in books where she had spells and seizures. What you’re not aware of that’s so strong is that her premonitions were very accurate — observably, and you could prove it,” Lemmons said. “She tells the story that God told her to turn left, because there’s danger ahead… that’s a very famous Harriet Tubman story. But there were other things that weren’t in the movie that happened later that other people observed. Like for instance, she was supposed to meet John Brown at Harpers Ferry and God sent her a vision that he was going to be cut down. She mourned then and told friends. She celebrated two years before the Emancipation Proclamation because God told her, [that] her people would be free.”

The story of Harriet Tubman is atypical in many ways. Some might also consider the film “Harriet” an unorthodox biopic about slavery, considering that it is less gruesome than other films with similar subject matter. Lemmons offered a different perspective.

“I’ve seen those movies, I love those movies… it’s been done very beautifully and effectively, not to diminish them at all,” she emphasized. “It’s funny when I hear that it’s not brutal, because I think it’s very brutal. It’s brutal to me — a mother making a decision ‘am I going to run or to stay with my children who have been taken away and hidden from me?’ It’s brutal to me a man who leaves his wife shortly after childbirth, because he’s going to be sold or he’s got to run. That’s brutal. To me seeing your sisters taken away screaming is brutal… the separation of families, the decimation of African American families through slavery and the horrible choices that they had to make. I wanted to talk about that type of brutality.”

“Harriet” is not only successful at highlighting the abysmal mentality of slave owners who rationalized brutalizing their slaves as a means to an end for the sake of financial stability; it also helps quell the narrative of slaves being compliant in submitting to the aforementioned brutality.

“I really spent a long time thinking about the mental gymnastics that these people had to go through to pretend,” she said. “They would go to church, pray to God like they were righteous while owning people and separating people’s babies from their mothers. They really tied themselves in knots with their narrative of their superiority and Black people being closer to animals and subordinate. They had to tie themselves in knots, because it was obvious that it was not true. One of the things that’s obvious today — that they are still trying to perpetrate — is that there was no resistance, because resistance belies the narrative that they were telling themselves.”

The stand-out cast of “Harriet” under the direction of Kasi Lemmons, affectively, powerfully and beautifully pays homage to Harriet Tubman and her legacy. It opens in theaters nationwide on Friday.