Hair By King changes lives one makeover at a time 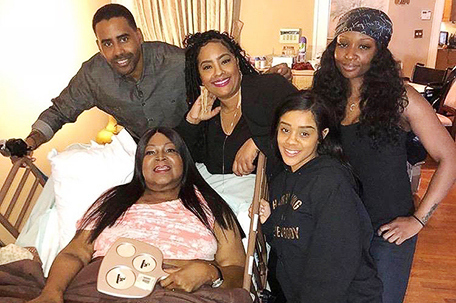 A large part of our identity is tied to our appearance. Our clothing, accessories, style and hair contribute greatly to how we feel about ourselves. Throughout history, hair salons have been the place people go to get a boost in their confidence and self-esteem.

When life happens quickly, the salon is a safe place to go in order to revive and reinvent oneself. The need to reinvent yourself becomes even more crucial after enduring the devastating, life-altering disease that is cancer. Cancer shatters so many lives, but those that are fortunate enough to survive their battle with cancer, often lose their hair in the process. Confidence and a sense of identity are often additional casualties.

Monae Freeman and Tanaja Mayweather, owners of the salon Hair By King, are doing everything they can to change the lives of cancer patients one makeover at a time.

Hair By King was created in 2014, after Freeman and Mayweather decided to delve into the multi-billion dollar hair industry. Since its inception, Hair By King has provided quality hair extensions, natural hair care and a number of other services to the Philadelphia community. In addition to the day-to-day work the salon owners provide, Freeman and Mayweather have also been providing hairstyles and wigs for cancer patients since 2015.

Their work was recently featured on Bill Anderson’s “For Goodness’ Sake” segment on FOX 29. In the segment, the ladies of Hair By King were part of a team that provided Pastor Slyester R. Kennedy, who was diagnosed with Non-Hodgkin’s lymphoma, a full makeover in bed. Pastor Kennedy’s granddaughter Nadirah surprised her with the makeover, which included a wig created by the ladies of Hair By King, and a custom look provided by makeup artist Niema Dunbar. An inspiration in her own right, Pastor Kennedy was the founder and CEO of Hannah’s House Inc., (HHI) an empowerment center for women. HHI provides help for women in transition in the form of educational training, career development and childcare. Despite this being Pastor Kennedy’s second time battling cancer, she remained steadfast until the end constantly reminding those around her to be encouraged. Sadly, after a strenuous battle, Pastor  Kennedy succumbed to the cancer. But her legacy continues to live on through her family as well as the communities she touched with her outreach.

The ladies of Hair By King continue to give back to the community. Freeman and Mayweather recently provided a makeover and wig for local teen and aspiring singer Maria Colón.

After being diagnosed with Hodgkin’s lymphoma at 14-years-old, Colón lost both her hair and her voice during radiation treatment.  Eventually regaining her voice and dream of becoming a singer, Colón   professionally recorded one of her original songs and made a video.  “Recover,”, inspired by her personal experiences, was recorded at Studio Breed, thanks to the Make-A-Wish Foundation. Mayweather shared her thoughts on the importance of giving back to these two incredible women.

“I think it was important to help Maria and Pastor Slyester, because when people are going through something so serious, I feel like the next best thing besides their health is their appearance. Most of the time people feel so insecure and down — I just want them to feel like the person they were before!”

Hair By King will undoubtedly continue to be a staple in the Philadelphia community for their continued dedication, selflessness and service. Hair By King is located at 4614 Lancaster Avenue. Visit www.hairbyking.com for more details.

Silver hair: The hair color trend young women are making their own