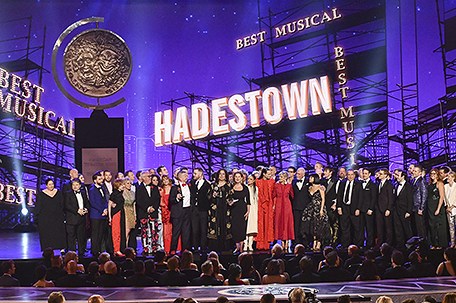 ABOVE PHOTO: The company of “Hadestown,” accept the award for best musical at the 73rd annual Tony Awards at Radio City Music Hall on Sunday, June 9, 2019, in New York. (Photo by Charles Sykes/Invision/AP)

NEW YORK — “Hadestown,” the brooding musical about the underworld, had a heavenly night at the Tony Awards, winning eight trophies Sunday, including best new musical and handing a rare win for a female director of a musical.

The crowd at Radio City Music Hall erupted when Ali Stroker made history as the first actor in a wheelchair to win a Tony. Stroker, paralyzed from the chest down due to a car crash when she was 2, won for featured actresses in a musical for her work in a dark revival of “Oklahoma!”

“This award is for every kid who is watching tonight who has a disability, who has a limitation or a challenge, who has been waiting to see themselves represented in this arena,” she said. “You are.”

Rachel Chavkin, the only woman to helm a new Broadway musical this season, won the Tony for best director of a musical for “Hadestown.” She became only the tenth woman to win as director of either a play or a musical on Broadway and told the crowd she was sorry to be such a rarity.

Cranston seemed to tap into the vibe when he won the Tony for best leading man in a play award for his work as newscaster Howard Beale in a stage adaptation of “Network.”

The respect for women’s work also got a boost when Butterworth, who earlier asked the crowd to give his partner, actress Laura Donnelly, a round of applause for giving birth to their two children while working on the ensemble drama, handed his best play trophy to Donnelly. A Donnelly family story inspired him to write the play.

Fontana won his first Tony as the cross-dressing lead in “Tootsie.” Fontana, perhaps best known for his singing role as Hans in “Frozen,” won in an adaptation of the 1982 Dustin Hoffman film about a struggling actor who impersonated a woman in order to improve his chances of getting a job. It was the only win for “Tootsie.”

Other winners included the legendary May, who took home her first ever Tony for best leading actress, playing the Alzheimer’s-afflicted grandmother in Kenneth Lonergan’s comic drama “The Waverly Gallery.”

Andre DeShields captured featured actor in a musical for “Hadestown,” his first Tony at the age of 73. In his speech, he gave “three cardinal rules of my sustainability and longevity.

“One, surround yourself with people whose eyes light up when they see you coming. Two, slowly is the fastest way to get to where you want to be, and three, the top of one mountain is the bottom of the next, so keep climbing.”

Host James Corden kicked off the show with a massive, nine-minute opening number that served as a full-throated endorsement of the live experience, with him beginning it seated alone on a couch in front of a TV, overwhelmed by his binge options, before taking flight with dozens of glitzy dancers from this season’s shows, all filling the Radio City stage with an unprecedented volume.

The first acting award went to Celia Keenan-Bolger, who won for best featured actress in a play for her role as Scout in “To Kill a Mockingbird.” She noted that her parents read her the book when she was a child in Detroit and her grandparents had a burning cross put on their lawn because they helped African Americans.

Bertie Carvel won best featured actor in a play for “Ink.” He said he wished he could be with his mother, hospitalized in London: “I love you, mum.”

“Hadestown” other wins were for scenic design, sound design, lighting design and orchestrations. It also went on to earn singer-songwriter Anaïs Mitchell a Tony for best score.

Legendary designer Bob Mackie won the Tony for best costume designs for a musical for “The Cher Show,” getting laughs for saying “This is very encouraging for an 80-year-old.”

The dark retelling of “Oklahoma!” beat the lush and playful revival of the rival Golden Age musical “Kiss Me, Kate” to the Tony for best musical revival. “The Boys in the Band” was crowned best play revival.

Sergio Trujillo won the best choreography prize for “Ain’t Too Proud — The Life and Times of the Temptations,” saying in his speech that he arrived in New York decades ago without legal permission. “I’m here to tell you the American dream is alive,” he said. It was the only win for the musical, which had 12 nominations, second only to “Hadestown.”

The awards cap a season that showed Broadway is in good shape. The shows this season reported a record $1.8 billion in sales, up 7.8 percent from last season. Attendance was 14.8 million — up 7.1 percent — and has risen steadily for decades.

A theme of tolerance, inclusion at this year’s Tony Awards tolerance