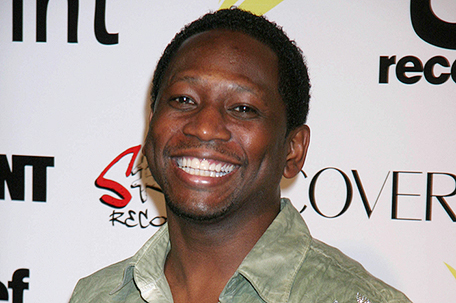 The end of comedian Guy Torry’s Philadelphia visit ended with a real bang!  From the minute he stepped onto the Helium Comedy Club stage to Chance the Rapper’s “No Problem,” Torry was ready to get going!  He begun his set with the warning, “I have no filter and I say what I want, so if you don’t like it, this isn’t the show for you.”  Taking his blazer off early in the show, he was ready to get the audience revved up for his ridiculous set full of jokes talking about marriage, divorce, getting older, dating, and of course–sex.

Performing in a series of shows starting January 12, the Def Comedy Jam alum has remained true to form, voicing his opinion on all kinds of raw and raunchy subject matter, cracking up hundreds of audiences since his comedic debut in the 90s.  Choosing not to live in older brother Joe Torry’s shadow (although they look hauntingly similar), he started booking gigs on The Tonight Show with Jay Leno and had guest appearances on sitcom favorite ‘Martin’.

A multi-talented man, Torry has written for TV shows ‘Martin’ and ‘Moesha’, and served as host and comedian of the Original Kings of Comedy in 1998.  If you haven’t caught his set on Def Comedy Jam, I highly recommend it, as the St. Louis native has a lot to say, and little to no filter as he has been warning audiences of for over 20 years.

The brave people who had front row seats to Torry’s show were heavily involved in his act, as he jested about an interracial couple and broke down slang into laymen’s terms for white audience members.  But the most shocking moments came towards the end of his set, as he asks intrusive sexual questions to older men in the audience who were in long-time relationships, bringing the pair of them on stage to demonstrate their best sexual posture.  As you can imagine, the step-by-step instructional portion of the show was simply outrageous and downright hilarious as Torry served as the teacher, critiquing their stances and techniques.

No one left the auditorium disappointed, and those that attempted to heckle the veteran found themselves the butt of the joke.  Torry’s quick wit and raw language pushes the envelope and ensures conversation following his performance.  Bravo Mr. Torry, and I will be looking forward to seeing you back in our city soon!