Guide to July 4th in Philadelphia 2017 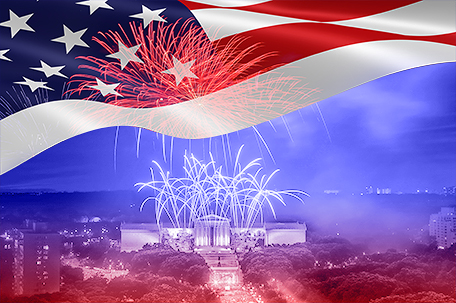 ABOVE PHOTO:  As the birthplace of America, Philadelphia knows how to shine. Fireworks blazing over the Philadelphia Museum of Art are a Fourth of July tradition during Philadelphia’s multi-day Sunoco Welcome America! bash. Timed perfectly with exhilarating live music, the fireworks paint the skies over the Benjamin Franklin Parkway.  (Photo by G. Widman for GPTMC)

Birthdays deserve big celebrations — and nobody will celebrate America’s 241st better than Philadelphia, the city where it all began.

While you’re here, take advantage of the holiday three-day-weekend and stay the night with the Visit Philly Overnight Hotel Package, offering free hotel parking and a number of amazing perks.

Read on for our complete guide to July 4th in Philadelphia.

The 160,000-square-foot National Constitution Center opens its doors for free on Thursday, June 29, inviting you to learn everything there is to know about the U.S. Constitution through an array of high-tech exhibits, artifacts and interactive displays. Bonus: Access to the fun “American Spirits: The Rise and Fall of Prohibition” exhibition is also free! 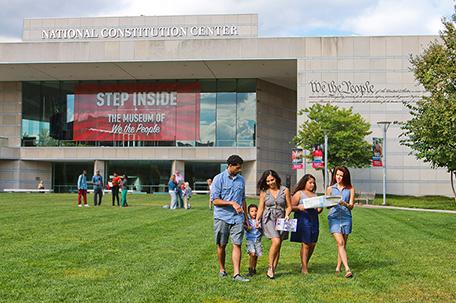 A Wawa fan favorite, Wawa Hoagie Day returns for its 25th year of providing free hoagies for all. The event will include a performance by the USO Show Troupe and a hoagie-building competition between police and firefighters. More than six tons of Wawa hoagies will then be distributed for free on the lawns of Independence Mall and the National Constitution Center.

Culture on Tap at the City Hall Courtyard

Philly’s popular traveling beer garden Parks on Tap brings a special Independence Day edition to the courtyard of City Hall. Labeled Culture on Tap, the pop up invites you to enjoy a drink al fresco in the heart of the city.

Free Admission to The Mummers Museum and Free Mummers Performance

Catch a live performance by the Mummers and explore the museum for free.

Learn about the fun and colorful tradition of the Mummers at the South Philly museum dedicated to the costumes, songs and lively routines of the iconic troupe. The Mummers Museum will offer free admission from 6-8 p.m. and the award-winning Quaker City String Band will perform — also for free — from 8-10 p.m.

Philly @ The Movies at The Schmidt’s Commons 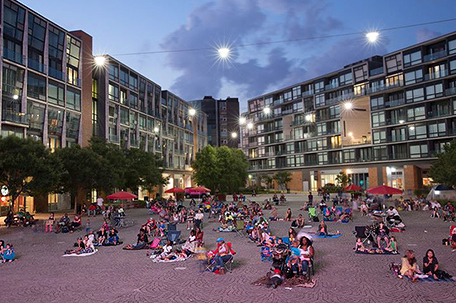 Head to Northern Liberties for a free movie at The Schmidt’s Commons on June 29.

Catch a movie under the stars at one of Northern Liberties’ most spacious open-air areas. Surrounded by restaurants and bars, The Schmidt’s Commons will screen a film (still to be announced) at 8 p.m.

Explore two of the city’s stellar museums for free on Friday, June 30.

Two of Philly’s top museums open up for free as part of Wawa Welcome America’s special museum series. Take in the 15-ton Egyptian sphinx alongside a host of other archaeological and anthropological artifacts and displays at the Penn Museum or head over to the Eastern State Penitentiary to explore the renowned, 11-acre prison, which once housed some of history’s most infamous inmates.

The weekend before the Fourth of July gets off to a tuneful start with a free performance by the world-renowned Philadelphia Orchestra along the Delaware River waterfront at Penn’s Landing. After the acclaimed musicians take their bows, all eyes will be on the skies for a spectacular free fireworks display.

Free Museum Day at the African American Museum in Philadelphia 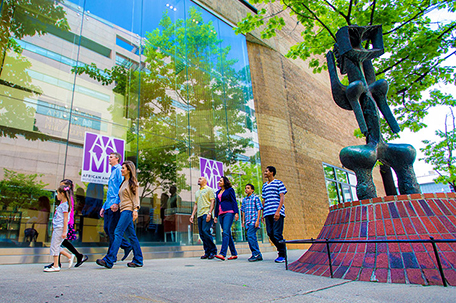 Explore one of the Historic District’s many museums for free on Saturday, July 1.
(J. Fusco for Visit Philadelphia)

The African American Museum in Philadelphia, founded in 1976, is the first institution built by a major U.S. city to preserve, interpret and exhibit the heritage and culture of African-Americans. Explore its four art- and history-packed exhibitions during for free as part of the Wawa Welcome America! Free Museum Days.

$1 Admission to the Powel House

Once the home of Elizabeth and Samuel Powel, an 18th-century power couple, the Powel House mansion simply drips elegance. As friends of Benjamin Franklin, John Adams and George Washington (the Washingtons celebrated their 20th wedding anniversary at the house), the Powels entertained in style, and the house shows it. Include it in your Independence Day festivities and take advantage of the opportunity to explore the house for free on July 4.

The U.S. Army Band “Pershing’s Own” has delighted audiences for years with its rousing and rollicking renditions of old standards, new hits and patriotic tunes. The group returns to the Delaware River waterfront this year for another highly anticipated evening performance beginning. Also highly anticipated: the fireworks display that will follow.

$1 Admission to the Physick House

From a medical office located in his spectacular mansion, Dr. Philip Syng Physick, one of the most accomplished physicians of the 18th century, treated high-profile patients like President Andrew Jackson and Chief Justice John Marshall in what’s now known as the Physick House. Come explore all of the stories his residence holds (which is filled with plenty of drama and marital scandal) on July 2nd during a special $1 admission day.

Pay-What-You-Wish Admission to the Philadelphia Museum of Art 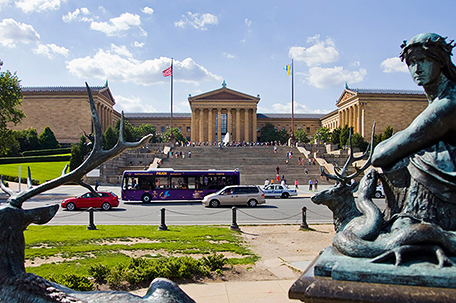 Pay what you wish to check out the Philadelphia Museum of Art’s expansive collection on July 2. (M. Edlow for Visit Philadelphia)

Explore over 80 period rooms and more within the third-largest art museum in the country when the Philadelphia Museum of Art offers pay-what-you-wish admission on July 2.

Philly at the Movies: Rocky at the Steps of the Philadelphia Museum of Art

Steps at Philadelphia Museum of Art

There’s no better spot to watch the Philadelphia classic Rocky than from the very steps that made its star character a legend. Head to the Philadelphia Museum of Art for a free, outdoor screening.

The Charles L. Blockson Afro-American Collection is one of the nation’s leading research facilities for the study of the history and culture of African Americans. The core collection was donated to Temple University in 1983 by Charles L. Blockson, a historian, bibliophile and collector of Afro-Americana. As a major research facility, it provides materials, expository programs and service for Black Studies research scholars.

Discover the story of real-life heroes through the interactive exhibitions and inspirational galleries at the National Liberty Museum, where you can score free admission on July 3. The museum hosts a wealth of galleries (eight in total!), featuring more than 179 works of contemporary art and the stories of 2,000 heroes from around the globe.

Visitors can party the day away at the Philadelphia’s Historic District Block Party. The festivities will fill the streets around Independence Hall with live entertainment, food vendors, kids’ games (wheelbarrow races, bubble blowing and more) and activities for all ages. The event space will feature three stages to showcase an array of artists including a Dixieland band, barbershop quartet and actors reciting portions of historical speeches, and the Kimmel Center will present a star-studded sneak peak at the 2017-2018 Broadway Philadelphia season featuring performances from popular shows.

The BYOB (bring-our-own-blanket) POPS! on Independence concert has become a holiday favorite — and for good reason. The combination of the Philadelphia POPS under the baton of Michael Krajewski, lively tunes and the dramatic backdrop of Independence Hall create a perfect setting for a night of music under the stars.

Founding Fathers and Mothers aren’t the only ones who will get their due during the Celebration of Freedom Ceremony. This year, everyday heroes will be honored during the patriotic observances held at Independence Hall.

Get the party started with the The United States of America Independence Day Parade, a flag-waving, stars-and-stripes, big-city spectacle with a small-town feel. Dozens of colorful floats, marching bands, military groups and thousands of participants from around the nation form a musical, colorful cavalcade that winds through the streets of Historic Philadelphia. 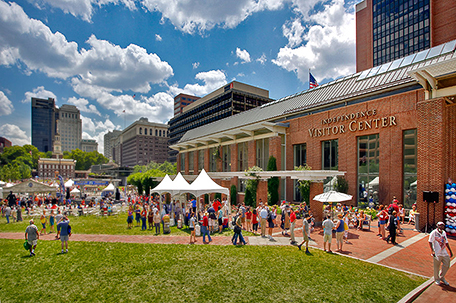 In honor of the nation’s birthday, the Independence Visitor hosts an annual party, complete with free cake and cupcakes. (G. Widman for Visit Philadelphia)

Join Betsy Ross in singing “Happy Birthday” to celebrate our nations 141st birthday during the annual party at the Independence Visitor Center, where a five-tier cake and 2,500 cupcakes will be on display in the shape of an American flag. Both treats will be distributed for free to those who attend.

Party on the Parkway

All of Philadelphia comes together in one giant romp for the Party on the Parkway, bringing five blocks of free entertainment. The day features musical performances, dancing, children’s activities, food galore and cultural events that celebrate the city’s many neighborhoods and nationalities. 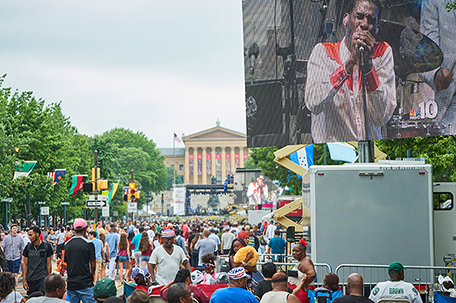 Don’t miss out on the epic fireworks show at the Philadelphia Museum of Art this Fourth of July. (G. Widman for Visit Philadelphia) 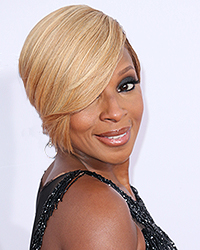 The Wawa Welcome America July 4th Concert takes over the Benjamin Franklin Parkway with one of the largest free outdoor concerts in the country. Headlining will be R&B songstress Mary J. Blige, who’s been named one of the greatest women in music by the likes of Rolling Stone and Billboard and who will perform hits like “No More Drama,” “Family Affair” and “Be Without You.” The Parkway Stage will also welcome the Philly POPS Big Band, jazz singer Tony DeSare and Broadway star Mandy Gonzalez who has performed in “Hamilton,” “In The Heights” and “Wicked.” Plus, Boyz II Men will make an appearance as they are honored for their impressive career.

Showcasing patriotism and important moments in our nation’s history, the Wawa “Welcome America” July 4th Fireworks will take revelers on a 240-year journey from July 4, 1776 to July 4, 2016. Accompanied by a powerful soundtrack that combines rousing musical works and powerful quotes, this fireworks display will light up the skies over the iconic Philadelphia Museum of Art for the grandest of grand finales starting at 9:30 p.m.

Choose to celebrate the nation’s official birthday with riverfront views at the Freedom Festival Fireworks. To take place around 9:30 p.m., a grand show will unfold over the Delaware River Waterfront. Beyond areas along the river, official viewing areas include the SugarHouse Casino and One Liberty Observation Deck.