Gugu Mbatha-Raw–Gugu Gushes about Working with Will Smith 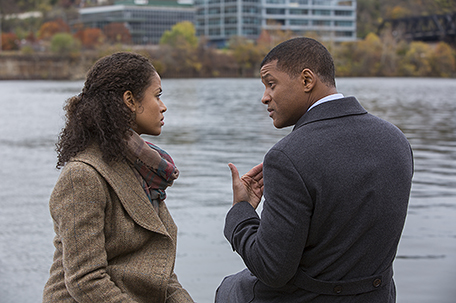 ABOVE PHOTO:  Gugu Mbatha-Raw and Will Smith star in Columbia Pictures’ “Concussion.”

Born in Oxford in the United Kingdom, Gugu Mbatha-Raw trained at the Royal Academy of Dramatic Art in London. Her first professional role was in an Open Air production of Shakespeare’s “As You Like It” as Celia. Following this, she landed roles at Manchester’s Royal Exchange Theatre, where she performed in “Antony and Cleopatra” and the title role of Juliet in “Romeo and Juliet,” opposite Andrew Garfield, for which she was nominated for the Manchester Evening News Award for Best Actress in 2005.

Mbatha-Raw’s other stage credits include the critically-acclaimed “Big White Fog” at the Almeida Theatre and David Hare’s “Gethsemane,” a production at the National Theatre that later toured the UK. She made her West End debut as Ophelia in “Hamlet” opposite Jude Law.

Her British television credits include “M15/Spooks,” “Dr. Who,” “Marple – Ordeal by Innocence,” “Bonekickers,” and “Fallout.” She subsequently starred as Samantha Bloom in the JJ Abrams NBC series “Undercovers,” for which she was nominated for an NAACP award for best actress in a television series.

Mbatha-Raw next starred alongside Minnie Driver, Nate Parker and Danny Glover in Beyond the Lights, a love story set in the music world. Last February, she was seen in Andy and Lana Wachowski’s Jupiter Ascending, starring Channing Tatum, Mila Kunis and Eddie Redmayne. And she is set to co-star opposite Matthew McConaughey in The Free State of Jones, a Civil War action-drama written and directed by Gary Ross which be released next May.

Here, Mbatha-Raw talks about her latest role playing Will Smith’s wife in Concussion, a drama about the National Football League’s attempt to discredit Dr. Bennet Omalu, the pathologist whose research uncovered the link between hits to the head and the early onset of a host of neurological disorders in football players.

Kam Williams: Hi, Gugu. I’m delighted to have another opportunity to speak with you.

Gugu Mbatha-Raw: Sure! How have you been, Kam?

KW: I really enjoyed Concussion, including your performance. How did you enjoy making the film?

GMR: Oh, it was a really great experience. [Writer/director] Peter Landesman was so passionate about the movie and about Bennet’s [Dr. Bennet Omalu] story. And having an opportunity to work with Will Smith was huge, obviously. I was also excited about transforming in this role. And it was fun working in Pittsburgh, the home of the Steelers, since I’d never been there before. And I found the city and its history quite fascinating.

KW: Was shooting in Pittsburgh at all awkward for the production, given how the movie presents the NFL in a bad light.

GMR: No, I never really felt any animosity. I think people were really thrilled that we were making a movie there. While the film raises questions about the ethics of the NFL, it really isn’t anti-football. Overall, it’s very supportive of the players in the way it discusses the CTE Chronic Traumatic Encephalopathy. So, we had a great experience in Pittsburgh.

KW: I told my readers I’d be interviewing you, so I want to mix in some of their questions with mine.

KW: Editor/Legist Patricia Turnier says: I really liked your performances in Belle and Beyond the Lights, and I love the soundtrack, especially the song “Blackbird” you sang on the Beyond the Lights soundtrack. How did you prepare to play Prema?

GMR: Well, Prema’s very much the emotional, driving force of the film in many ways. She’s serves as Bennet Omalu’s moral compass. I started with the script, working with Peter. And I got some medical advice from friends of mine and from my parents, who are both medics. It was great to have my mom on standby. [Chuckles]

KW: Did you meet with Prema?

GMR: Yes, but not until the end of the process. She was a little reticent about being involved. So, I wanted to respect her wishes. On the other hand, that meant we could have a little artistic license in creating Prema for the film. I also worked with a dialect coach who helped me with the Kenyan intonations, since Prema’s from Kenya. And then we did some rehearsals with Peter and Will prior to shooting.

KW: Will Smith was famous for memorizing his co-star’s lines early in his career. If you watch episodes of the “Fresh Prince”, you can often see him mouthing other actors’ lines as they speak. Did he do that with you?

GMR: [LOL] I’ve heard him talk about that. I can safely say he doesn’t do that anymore. [Laughs some more] Will is such a phenomenal actor. Everyone knows his personality as a movie star, but he really transformed himself into Bennet for this film. It was a very powerful, dramatic role for him.

KW: How was it working with him?

GMR: It was really joyful experience. He such a professional. He’s very hard-working, but he also has a great sense of humor. So, he was a fun person to be around on the set.

KW: Harriet Pakula-Teweles asks: How does Dr. Omalu’s battle resonate with you personally?

GMR: Wow! Well, I really respect Bennet, because his journey is a fight for exposing the truth. I really love that kind of David and Goliath story where you see the underdog rise and do what’s right. I can really relate to that morality challenge. Also, as an immigrant to the United States myself, I can relate to the journey of being a foreigner in a new country. I think that can be good when you see things from a fresh perspective, since you’re not being numbed by the culture you grew up in. You’re seeing things anew. If Bennet hadn’t grown up in Nigeria, would he have been the person to have identified CTE as so damaging to football players. I don’t know. I feel that, sometimes, a fresh perspectives allows for clarity.

KW: Patricia is wondering whether you are going to appear in Star Wars Episode VIII.

KW: She’d also like to know what you think of Simone De Beauvoir’s famous quote: “One is not born, but rather becomes a woman.”

GMR: I’ve never heard that quote before. It’s very interesting. I think it’s about ownership and authenticity. I suppose we all grow into ourselves. I guess it depends on how you define yourself. I love the idea that we all become more ourselves as we go through life. Sometimes, it’s about shedding skins to get in touch with who you really are underneath.

KW: Her last question is: What is your opinion regarding women in the movie industry? I know that is a very broad topic which encompasses a lot.

GMR: [Laughs] How much time have you got?

GMR: I can’t really think of one off the top of my head.

GMR: Some nice memories of being at my grandmother’s house with my mom. My grandmother passed away when I was 3.

GMR: I worked for Pizza Hut in Oxford. I got a job there in my summer holidays when I was 16.

GMR: Oh, gosh! That’s tricky. I have so many, and I’m always discovering new designers. Luckily, I have a great stylist who sort of helps me out with that stuff. I really, really love Carolina Herrera and Alexander McQueen. I also love British designers like Burberry.

KW: I thought Burberry only made men’s raincoats.

GMR: No, they have a huge range. I’ve worn a few of their gowns. They even do makeup.

GMR: That’s hard for me to say. I’m still discovering Los Angeles, to be honest with you. I know certain pockets quite well… the beach … the Eastside… It would be great to live right by the sea on the beach… on the sand. I know that would be prime real estate, but that would be fun.

GMR: I love Ursula from The Little Mermaid, although I don’t know if she’s really a monster. But she was sort of evil and fabulous. .

GMR: Am I really famous? I don’t really know. That’s not something I’ve ever thought about. I believe you’ve always got to live life fearlessly. I don’t think you should wait to be recognizable to do the things you love.

GMR: Make your own path. You definitely have to stay true to who you are. Following in someone’s footsteps is a nice idea but, ultimately, there’s only one you, and you have to make your own way.

GMR: [LOL] Probably having massages. That’s the one thing that seems to help me get over jet lag.

GMR: Let me see… Right now I have some South African rands, some American dollars and some British pounds.which probably tells you I’ve been traveling a lot.

KW: It sure does. Well, thanks again for the time, Gugu, and best of luck with Concussion.

GMR: Thanks very much, Kam. Bye.

To see a trailer for Concussion, visit: https://www.youtube.com/watch?v=Qk-1TLVUPZk