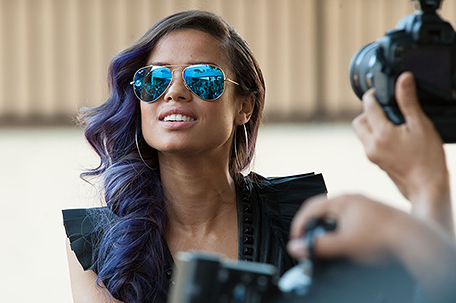 Gugu Mbatha-Raw skyrocketed to fame earlier this year on the strength of her inspired performance as the title character in Belle, a biopic about a biracial slave girl who was brought by her white father to England where she was raised in the lap of luxury by aristocratic relatives. Here, the emerging ingénue compares that role to her new one in Beyond the Lights where she plays Noni, a pop star who falls for her hunky, supportive bodyguard.

Kam Williams: Hi Gugu, thanks for another interview.

KW: What interested you in Beyond the Lights? This is quite a different role from the one you played in Belle.

GMR: Noni’s not a bad girl. She’s more of a victim. What interested me in this film, after doing Belle, which was a period drama set in a very repressed society, was the idea of exploring something much more contemporary: the sexualization of women and girls by the music and entertainment industries, how that has become the norm, and what is the cost of using sex to sell music, psychologically and emotionally. Gina [director Gina Prince-Bythewood] often talks about changing the conversation and steering the culture in a different direction, and about providing some inspiration to become your authentic self. Noni has become trapped by her public persona, so there was a lot to sink my teeth into.

KW: Seeing you play such a different character, here, and so well, told me how gifted an actress you are.

GMR: Oh, thank you! I’m interested in playing lots of different complex women. And this was a real opportunity to have a layered and damaged character where the message was empowering in that she was ultimately able to heal and love her real self, and to find the real person within, underneath that armor and persona that had been created for her. Also, it’s not often that you get a chance in one role to do the glamour bit and then strip off all the makeup and reveal the real person beneath the façade. Usually, it’s either a glamorous role or a raw, emotional role. This one ran the full gamut, and was a great challenge.

KW: You and your co-star, Nate Parker, generated a lot of chemistry onscreen.

GMR: Yes, Nate is such a terrific actor. It was great working with him. He’s very committed, very focused, and has an innate warmth and gravitas that he brings to his character, Kaz, for Noni, who’s trapped in such a superficial world. Kaz is grounded and has a sense of decency about him, just like Nate, who is a very principled person who stands up for what he believes in. And those qualities really come through in the character of Kaz.

KW: Minnie Driver did a great job as your mother. Was your own mother in real life that sort of stage mom?

GMR: [LOL] No, absolutely not! I loved working with Minnie who’s hilarious and a wonderful actress. And one of my favorite scenes in the film is my big confrontation of her. But my own relationship with my mom couldn’t be further from the one that Noni has with hers. I have a great relationship with mine, who has never been a “momager.” I was always the one leading the way in terms of wanting to do acting, singing and dancing. I was lucky that my mother had a very well-adjusted perspective of the world, and never pressured me to do anything I didn’t want to do.

KW: Do you think your personality is more like Noni’s or Belle’s?

GMR: I don’t know. I think there are parts of myself in every character I play. On the surface, I’m obviously very different from Noni, but she has a full emotional life. And as an actress, I’m an emotional person. And I can relate to Belle in several different ways, including how she learned how to stand up for herself.

GMR: I suppose the biggest difference is the hair, clothes and makeup. At home I wear my own clothes, no makeup and don’t do anything exciting with my hair. [Giggles] I get to borrow pretty dresses for the red carpet, and have experts do my hair and makeup.

GMR: I see my reflection, I guess. [Chuckles]

GMR: A belief in themselves. And for artists, often a missing piece.

GMR: I enjoy classics, but classics are classics for a reason. I prefer to focus on the future. There are a lot of new stories to be heard.

GMR: I don’t really have one dish. I’m a very improvisational cook. I sort of like to make things up as I go along. I’m quite creative in the kitchen.

GMR: Nelson Mandela, Audrey Hepburn, my mom and dad, and all my friends and family.

KW: You remind me of Audrey Hepburn. Do you get compared to her a lot?

GMR: She’s one of my style idols. I really admire her. I was just shooting The Whole Truth with Renee Zellweger in New Orleans, and she kept calling me Audrey Hepburn, because I was always riding around on my bicycle. I was like, “Okay, I’ll take it.” She was a phenomenal actress and fashion icon who had a real grace and ladylike quality.

KW: What interested you in doing The Whole Truth?

GMR: I had seen [director] Courtney Hunt’s first film, Frozen River. From that moment, I wanted to work with her and automatically trusted her vision and voice as a filmmaker. And I was interested in doing something different, playing a defense attorney, which afforded me an opportunity to dive into a completely new world. For me, it was all about working with an inspirational filmmaker.

KW: Thanks again for the opportunity, Gugu, and best of luck with the film.

To see a trailer for Beyond the Lights, visit: https://www.youtube.com/watch?v=1rvgJ2WbDsc