‘Guerrilla’: a drama of love, revolution set in ‘70s London 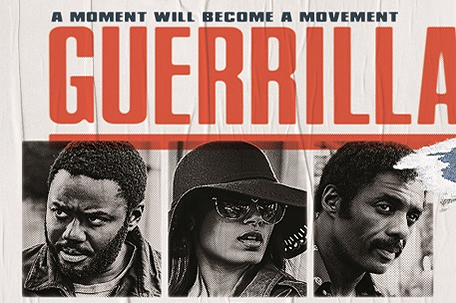 LOS ANGELES –John Ridley’s projects always have something to say, and it’s always worth considering.

The writer, director and producer works a big canvas and does it thoughtfully, whether in his Oscar-winning screenplay for “12 Years a Slave,’’ his ABC anthology series “American Crime’’ or his new drama about England’s 1970s Black Power Movement.

“Guerrilla,’’ a Showtime miniseries debuting Sunday, extends his willingness to take on thorny political and social issues and his insistence on giving each stakeholder a chance to be heard.

The drama also allowed Ridley, a self-described “child of the ‘70s,’’ to revisit his youthful, unshaded admiration for American radicals such as George Jackson of the Black Panther Party and Donald DeFreeze, known as Cinque when he led the Symbionese Liberation Army militia group that kidnapped heiress Patty Hearst.

“As a young Black man, they were just cool. They were icons of the movement,’’ Ridley said. But maturity and reflection gave him a different perspective on violent radicalism and its proponents, he said.

“You realize these individuals are complicated, they’re human and imperfect. And you start to ask questions about the ends justifying the means and, for me, that’s where these stories really become exceptionally interesting,’’ Ridley said.

The six-part series’ characters include a couple (Babou Ceesay, Freida Pinto), deeply in love and increasingly radicalized. The cauldron they’re living in: A nation at odds with ethnic diversity created by its own post-WWII immigration policies to rebuild the workforce.

The conflict grows increasingly violent in both civilian and law enforcement quarters, with British police working from a “black power desk’’ tasked with eradicating black activism. They go hard after civil rights proponents, and some respond in kind.

The Gambian-born Ceesay, whose character debates the pursuit of justice through violence, said political tensions in his native country made him question how far he would go if family members were in jeopardy.

“I think what’s interesting for me about ‘Guerrilla’ is that maybe somewhere in all of us there is a guerrilla and, if the conditions were right, we might become one,’’ he told reporters earlier this year.

Among those caught in the middle: police deputy Liam Cullen (Daniel Mays), who is dismayed by Pence’s bigotry and resents English bias against his Irish roots and, on the other side, Kentoroabasi “Kent’’ Fue (Idris Elba, also a producer on the project), who advocates change but rejects extremism.

Britain’s turmoil was reflected internationally, as bombings, airplane hijackings and killings committed on behalf of varied causes made for routinely frightening headlines. That the American-born Ridley would set “Guerrilla’’ in Britain is a result of his dogged pursuit of telling the story he’d originally set in San Francisco. He found no U.S. takers but, while working on a film in London, was encouraged by a British producer to fit his characters into U.K. history.

Ridley set out on a “learning tour’’ that included discussions with British activists including husband-and-wife Darcus and Leila Howe; Farrukh Dhondy and Neil Kenlock, who became consultants and advisers for the production. (Darcus Howe died April 1st of cancer.)

The story was exported with a key element intact, that of the interracial relationship of Jas and Marcus. The decision to make the lead female character Asian and the series’ failure to depict black female activists drew criticism at a recent London screening.

Discussing the reaction several days later, Ridley defended his approach and called on others to “tell more and do more and say more’’ about the overlooked period.

He hopes his project compels “people to think a little bit more, causes people to react a little bit more,’’ he said. “I’m under no illusion that any one TV show, certainly a TV show that I do, is going to change the world or change people’s minds. But if it helps anyone see themselves in others, I do think there’s value in what we’re trying to do.’’