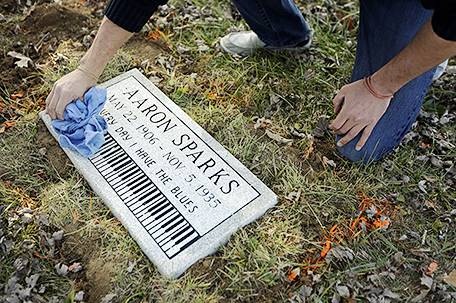 ABOVE PHOTO: Aaron Pritchard wipes off a headstone after laying the marker on the previously unmarked grave of blues musician Aaron Sparks in Crestwood, Mo. Pritchard is part of the Killer Blues Headstone Project, a nonprofit effort to posthumously honor sometimes long-forgotten blues musicians with grave markers. The group has laid 22 headstones to date, with several more complete but awaiting placement.

But visitors to the overgrown St. Louis cemetery where Bankhead was buried more than a decade ago would never know his musical legacy. Or his name.

Be it neglect, inattention or hard times, Bankhead’s family never added a grave marker to his burial plot. That will soon change thanks to the Killer Blues Headstone Project, a nonprofit effort to bring belated recognition to long-forgotten blues musicians.

Though the group has posthumously honored musicians as far away as California, its efforts are concentrated in a fertile blues corridor that stretches from the Mississippi Delta through St. Louis, north to Chicago and Michigan.

“These guys gave so much to America via music,” said Aaron Pritchard, the project’s vice president. “They deserve a headstone.”

Pritchard, 33, grew up on rock `n’ roll and discovered the St. Louis blues scene after high school but stopped playing music for a living to raise his two small children. A retail manager by day, Pritchard must be equal parts musicologist, cultural historian, archivist and Internet detective for the blues genealogy project.

Several years ago, he met a kindred spirit in Steven Salter of Whitehall, Mich., whose own search for his musical idols began with a detour to the Chicago area while en route to the New Orleans Jazz and Heritage Festival.

After stopping at the graves of McKinley Morganfield, better known as Muddy Waters, and Chester Burnett (aka Howlin’ Wolf), Salter found an unmarked grave for blues pianist Otis Spann. A letter bemoaning Spann’s fate to a blues magazine ignited a successful fundraiser and convinced Salter to launch the headstone project in 2008.

“I figured if I didn’t get to see them while they were alive, I could at least stop by their gravesites and pay my respects,” the 62-year-old said. “When I got there, there was nothing but a piece of grass.”

While heartfelt, the project’s efforts remain modest. They have laid 22 headstones, with several more completed but awaiting placement. The flat grave markers cost between $300 and $400 each and are engraved with the artist’s dates of birth and death, along with images of keyboards, saxophones, musical notes or guitars.

There’s no shortage of candidates: The project’s website lists another two dozen late musicians whose earthly whereabouts are unknown. And Pritchard carries a dog-eared reference book that lists the vital statistics of more than 1,400 blues players, organized by state.

The headstone project follows the path of earlier efforts like the Mount Zion Memorial Fund, which emerged two decades ago when the Mississippi church where blues legend Robert Johnson was buried faced foreclosure. Record label executives and musicians such as John Fogerty and Bonnie Raitt led the efforts to honor Johnson, James and other prominent names.

The Killer Blues project, by contrast, tends to seek out the less famous sidemen, musicians such as Bankhead, a fixture on the St. Louis blues scene who nonetheless had to make ends meet by also working as a sheriff’s deputy and a security guard. Several appreciative family members, including his youngest daughter and her two children, attended an October benefit concert to raise money for Bankhead’s marker.

“I really appreciate what they’re doing for the people,” said Willette Hare, who dated Bankhead. “I thought it was marvelous.”

In early December, the project honored Aaron “Pinetop” Sparks, a hard-living boogie-woogie piano player credited with writing the standard “Every Day I Have the Blues” before his death in 1935 at age 27. Sparks’ grave was unmarked for another 78 years before Pritchard laid a stone at a historically black cemetery in suburban St. Louis.

While some of the project’s graveside ceremonies lead to late-night jam sessions, the Sparks service was somber and simple, with only Pritchard, the cemetery superintendent and several reporters present.

Once the stone was secured, Pritchard placed his iPhone on the ground, Sparks’ signature rollicking song filling the silence.