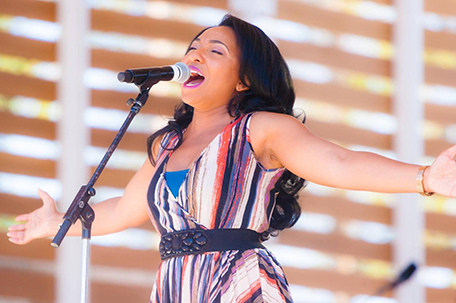 SAN FRANFRISCO –Being considered in four preliminary Grammy categories for her debut album, “Conversations,” in her first year as a NARAS voter provided smooth soul singer-songwriter Selina Albright with an entirely new perspective about what her father — contemporary jazz saxophone giant and eight-time Grammy nominee Gerald Albright — experienced while she was growing up.

“When I was little and my dad would tell me that he was up for a Grammy, I didn’t realize how life-changing the process of getting on that final ballot must have been for him – the hundreds of tracks he must’ve been introduced to, the wonderful people he must’ve met, how big and multi-faceted the world of music must’ve seemed by the time he’d finished voting, and how much it must have meant to him to be nominated out of the multitudes. Now, I’m beginning to understand the magnitude of the honor and responsibility of being a voting member, which I take seriously,” reflected Albright about her father, who makes a guest appearance playing flute on “Conversations.”

Albright is a “Best New Artist” candidate in the midst of a breakthrough year that began with the release of the album’s attention-grabbing first single, “Eat Something,” a joyous affirmation of self-love and acceptance while in a romantic relationship with lyrics that make it okay to pack on some extra weight.

Like the nine originals she penned for the collection, the “Best R&B Song” contender is inspired by intimate conversations she’s had with family, friends and loved ones. The track is receiving airplay, and has charted at two different radio formats: urban adult contemporary and smooth/contemporary jazz.

Throughout the year, Albright has supported “Conversations” with concert dates across the country, selling out clubs and playing packed theaters and festivals on shared bills, including shows with her father. She was invited on a 24-city Christmas concert tour with smooth/contemporary jazz royalty — Dave Koz, David Benoit, Rick Braun and White — that launches the day after Thanksgiving. Albright hopes to receive an early Christmas gift when the Grammy nominations are announced on November 28.

“The honor of having my own music on the preliminary ballot is so beautiful to me. I can’t even put into words the honor I’d feel to actually get a Grammy nomination. I can’t wait to see where this journey takes me!” she said.