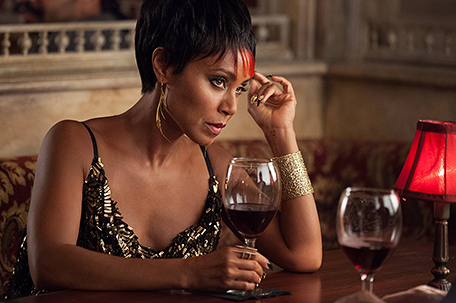 ABOVE PHOTO:  Jada Pinkett Smith as Fish Mooney in the “Selina Kyle” episode of GOTHAM on FOX.

“Gotham”, which already had a larger-than-usual 16-episode original order from FOX, has been picked up for six more episodes to bring its total to a full-season 22, reports Deadline.com.

Normally, shows get an initial order of 13, and add an additional nine (the back nine) if ratings warrant such a move.

As previously reported, ABC’s new shows “How To Get Away with Murder,” and “Black-ish” were awarded full-season pickups last week. No decision yet on Fox’s other new fall series, “Red Band Society” with Octavia Spencer, which has struggled to keep viewers, though “Red Band” tied “Gotham” for the biggest Premiere Week percentage gain (82  percent).

Meanwhile, “The Walking Dead” had a bloodbath situation both on screen and in the ratings. Sunday’s Season 5 premiere at 9 p.m. sliced and diced all non-football competition with 17.3 million total viewers. It bested the Season 4 premiere, which drew 16.1 million on Oct. 13, 2013.

Over on FX, the premiere of “American Horror Story: Freak Show” (a.k.a. Season 4) on Wednesday shattered all records at the network, and this morning was rewarded with a 13-episode pickup for Season 5.

The series, which features Angela Bassett returning to the franchise (this time as a three-breasted woman), topped the premiere of last year’s Season 3 installment, “American Horror Story: Coven,” by 38  percent in total viewers (10 million vs. 7.27 million).

“The American Horror Story anthology has had the highest growth trajectory of any show in FX history, not to mention an unprecedented track record of success in awards recognition,” John Landgraf, CEO of FX Networks and FX Productions, said in today’s pickup announcement.

“With Nip/Tuck, Glee, The Normal Heart, and American Horror Story, Ryan Murphy has established himself as one of the most successful and prolific producers of this generation. We expect AHS: Freak Show and the next incarnation of AHS to further his legacy.”