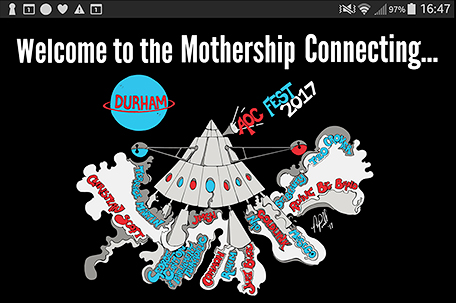 Summertime calls for great food and drink, scorching temps, and music festivals all over the country.  The last weekend in April gave us a taste of what music festivals will be like for the season to come.

If you’re unfamiliar with the wave of music being termed “new jazz,” allow me to get you hip.  In the quaint and artsy city of Durham, North Carolina, coined “Bull City” from their tobacco industry, The Art of Cool Festival came in with a bang!  Presented by The Art of Cool Project, the non-profit organization was founded by educator and trumpeter Albert Strong, IV and Cicely Mitchell, Dr.P.H. of Al Strong Music Productions and their focus was on educating the masses on jazz and jazz-influenced music. The three-day event not only includes concerts, but business-centric panels and workshops titled “Innovate Your Cool,” for entrepreneurs trying to find their footing in the music industry.

Venues were sprawled across downtown Durham with a variety of restaurants and theaters in anticipation of the eccentric artists, blessing crowds with their aural pleasures.  This was a great move, because streets weren’t overcrowded with bodies, and it made it easy to stroll Main Street and window shop the boutiques or catch the next act a couple streets over.  The Durham Performing Arts Center (DPAC) and the Carolina Theatre were the biggest venues, and even those two weren’t overwhelming with crowd control.

Over 30 acts came to the city to express their musical talents, and each was met with extreme excitement from spectators spanning all backgrounds.  In its fourth year, the festival is constantly expanding their reach and creating a boom in the Durham economy, which has an estimated annual revenue of $900 thousand dollars.  This year they even featured a mobile app to custom prepare your itinerary.

AOC Fest unofficially started Thursday night with two kickoff parties leading up to the next day which was full stellar performances including DMV natives Masego and Goldlink. If you’re unfamiliar with their music, get acquainted because you’re guaranteed to enjoy the beats, lyrics, and life these men bring to a track.  I recommend Masego’s “Pink Polo” EP and Goldlink’s newest album, “At What Cost.”  Other heavy hitters for the night were rap god Rakim, Revive Big Band, Pharoahe Monch, Goapele, DJ Complex and Christian Scott.

Saturday was a combination of Innovate Your Cool workshops in the morning through early afternoon and concerts in the evening.  Some of the events happening on this super hot Saturday were the networking breakfast; an introductory yoga class; a beat making lab session; a coding workshop; Equity and Entrepreneurship; Lessons In Jazz Who Sampled? workshop; an Innovate Your Cool cypher, and a virtual reality presentation.  As the temperature cooled, the music was fired up with Terrace Martin and the Polly Seeds, Danny Blaze, the legendary George Clinton, North Carolina native Rapsody with Common and Philly legend Just Blaze.  His DJ set included special guests 9th Wonder and Phonte of Big Brother fame. Kindred the Family Soul ended the fest, complete with a Sunday brunch performance, filling folks with good vibes, good food, and good music.

Some of the organization turned awry, as this was what I’m assuming to be their largest turnout yet.  And as with any form of growth, there are some pains that go along with it.  For the most part, everyone fully enjoyed their experience.  People came from the Deep South and high north just to get down and enjoy some amazing Black music in Bull City.  The city is beautiful with just the right amount of people, good food and active nightlife to keep you going.  If the music is hot, what better incentive to go visit?  Tickets are already on sale for the 2018 festival and who knows what they have up their sleeves for their fifth year!