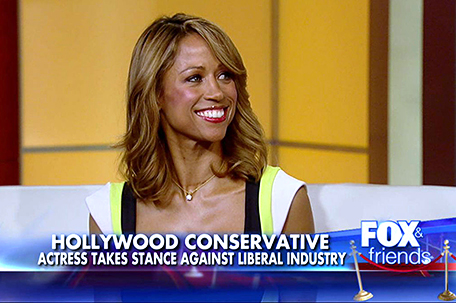 Yesterday it was very quietly announced that Fox News had decided not to renew the contract it had with actress (is she still one?) and conservative political and cultural pundit, Stacey Dash.

Along with conservative columnist George Will, who had been at odds with the network over his “Never Trump”stance, and GOP strategist Ed Rollins, Fox News cut their ties with them while signing up the former leader of England’s UKIP political party and Brexit strategist Nigel Farage as a contributor. Barge fits in better with the network’s pro-Trump attitude.

When Fox News added Dash to the network in 2014, the network boasted that they were signing her up because “Stacey is an engaging conversationalist, whose distinctive viewpoints amongst her Hollywood peers have spawned national debates.”

Viewpoints such as when she claimed during an TV interview that women need to “work harder” and “stop complaining” about their lot in life.

That was before it was revealed last summer that Dash had filed for bankruptcy a few years earlier, claiming she only had $7 in her checking account and “was surviving on monthly handouts from her then fiancee, because she couldn’t get enough work as an actress in Hollywood”.

Of course, her real function on the network was to act as one of those “safe kneegrows” – there to placate and reassure Fox’s rapidly aging White male audience that Black people are to blame for all the problems in the world.

And now, as she struggles to regain employment, the question that begs to be asked is: did Dash truly believe what she was saying while a Fox News employee? Or was it just a act to salvage a quickly fading acting career, knowing that, as a “Black conservative” (a minority group) she could always find work on Fox News or another conservative media outlet?