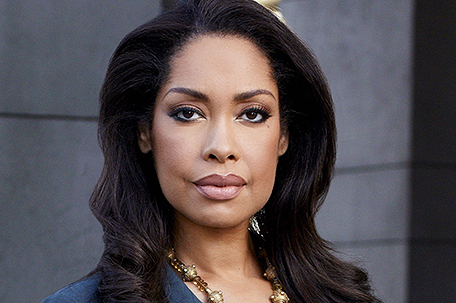 ABOVE PHOTO:  Gina Torres as Jessica Pearson in “Suits”

Gina Torres is leaving “Suits” after five and a half seasons. Airing on the USA Network, it’s a series I’ve actually never watched (in part because I haven’t had cable TV in a long time), although it’s on my binge list, so I plan to check it out eventually.

Regardless, Torres has already landed her first post-“Suits” role, joining the cast of Shondaland’s ABC series, “The Catch,” which returns for a second season next year.

Torres made her final appearance on “Suits” during the season 6 summer finale, although the door has been left open for a potential return, as has been reported by sources familiar with the matter.

“Playing Jessica Pearson has been one of the greatest rides of my career,” Torres said in a statement. “It isn’t often that an actress gets the opportunity to embody so rich a character. Thanks to [creator] Aaron Korsh’s wonderful writing and his singular vision of Jessica, I believe that together we created a woman who has everything. Real power, wealth, intelligence, intuitive wisdom, humor, unapologetic female sexuality and, arguably, the best wardrobe in all of television. Because of all these qualities, I have not only been able to entertain ‘Suits’ fans but, with much pride and awe, I can say I have also inspired quite a few future ‘Jessicas’ as well as shined a light on real-life Jessica Pearsons who are out in the world at this very moment, owning their place at the head of the table…”

Torres said she made the “difficult decision” to leave in order to spend more time at home (“Suits” films in Toronto).

As for what role she’s booked on “The Catch,” it’s being kept underwraps for now. But I’d guess that whoever the character is, she’ll probably be formidable.

Black economics and the ultimate “Catch 22”

Oprah Winfrey says au revoir to Chicago, but not goodbye: ‘You will still see me eating at RL’