Getting to know Maria Nhambu 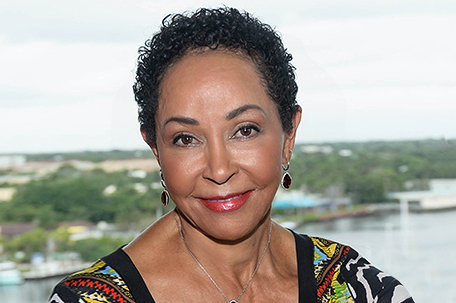 An author, health advocate, and professional dancer, Maria Nhambu has traveled the country to share her inspiring story. Raised by German nuns, Nhambu has faced hardships in her childhood due to her mixed racial identity and her unknowingness of her origins. Author of the “ Dancing Soul” “ memoir trilogy, Nhambu continues to inspire her fans to set themselves on a path of health and self-discovery through the mystery of dancing.

Creator of a popular workout based on African dance (Aerobics with Soul®), Nhambu has made sharing her love of Africa and its culture and rhythms the focus of her life.

Born December 30, 1943, in Tanga, Tanzania in East Africa, she was raised by German nuns at an orphanage for mixed race children. Throughout the hardship and mixed blessings of her childhood, Nhambu (as she is called) sustained her spirit through dance and kept alive her dream of further education. She was able to fulfill that dream in the United States where she attended college, became a teacher and eventually married and raised two children. “Africa’s Child”, the first book of her memoir trilogy, tells Nhambu’s story from her arrival at the orphanage as a four-day-old infant to her departure from her homeland.

Growing up at the Don Bosco Home for Children in Kifungilo, Tanzania, Nhambu was taught by German nuns. She had a powerful dream—to become as educated as possible and to teach. After completing elementary and middle school studies, she was chosen to attend Marian College in Morogoro, a newly founded high school for African girls operated by American Maryknoll Sisters. After graduation, she taught at Marian College for one year before coming to America to attend St. Catherine University (then the College of St. Catherine) in St. Paul, Minnesota, on a full academic scholarship. She graduated in 1967 with honors in French and pursued graduate studies at the University of Maine, Laval University in Quebec, Canada, and the University of Rennes, France.

Nhambu achieved her dream of being a teacher. She taught French at Regina and Washburn High Schools in Minneapolis. As she reconnected with her African roots, she expanded her teaching focus to include her African heritage. She taught African Studies and Kiswahili at Central High School in Minneapolis and also a summer course in African Heritage at Macalester College in St. Paul for the Equal Educational Opportunities Program. Along with tutoring both French and Kiswahili extensively, she taught Kiswahili through the University of Minnesota Extension Program, as well as African Dance at the Open U.

For a number of years in Minnesota, Nhambu was a sought-after presenter performing African dance and lecturing on African culture for Young Audiences, a national organization that brought the performing arts into schools. Her performances took her across Minnesota, Wisconsin, Iowa, Colorado, Kansas, South Dakota, North Dakota, Ohio and Illinois. She also performed with the Minnesota Orchestra during Black History month in Minneapolis.

Nhambu has performed in Canada, Norway, Montserrat, West Indies, Kenya, and in her own Tanzania. She was a participant in the U.S. State Department’s Citizen Ambassador Program to Russia and Hungary, and was a presenter at the IV Congresso Internacional Aerobica in Chile.

Among Nhambu’s many presentations at conferences and workshops is an appearance at the Black Family Summit Convention at the University of South Carolina. She was also a member of the core faculty at the Omega Institute for Holistic Studies in New York. She has given seminars and performances for Black Expo USA. For several years, she was also a presenter at the New World Fitness IDEA conventions, and performed at Dance Africa America.

Nhambu toured the United States with African American Women on Tour (AAWOT) for several years and was a presenter for the National Alliance of Black School Educators (NABSE).

Passionate about African dance, art and culture, Nhambu developed an African dance workout based on the traditional East African dances she learned as a child. Aerobics With Soul® is an engaging combination of high quality fitness movement, aerobic exercise with the excitement and whole body involvement of African dance.

Nhambu developed a complete range of Aerobics With Soul programs and ran her own Aerobics With Soul® studio in Minneapolis with classes for children, adults and seniors. She created and is the star of the award winning “Aerobics With Soul” exercise video series. “Karibu”, the first in the series, received critical acclaim in “Billboard”, “Video Choice”, and “Essence” magazine, and won first prize in the combination high/low impact aerobics category in the New York City Sports Magazine competition in1988. ABC TV’s “Good Morning America” recommended the video to its viewers. “Serengeti”, the second video, came out in 1992. “Kilimanjaro”, the most advanced of the workouts, was filmed on location in Tarangire National Park in Tanzania, East Africa.

As the creator of Aerobics With Soul, Nhambu has taught and been a presenter at Fitness Conferences, Educational Organizations, Cultural Conventions and Fitness Spas all over the world for more than thirty years. Certified by (ACE) American Council on Exercise, she has trained Aerobics With Soul Instructors throughout the United States, Europe, Mexico the Caribbean and Africa. In 1996,  she was invited to be an annual specialty instructor presenter of Aerobics with Soul at Rancho La Puerta, Mexico. The popularity of her African dance workout has brought her back every year to conduct classes. Aerobics with Soul has been taught to capacity classes at St. Catherine University as part of the physical education program.

Get in shape with these seven Black-owned fitness companies