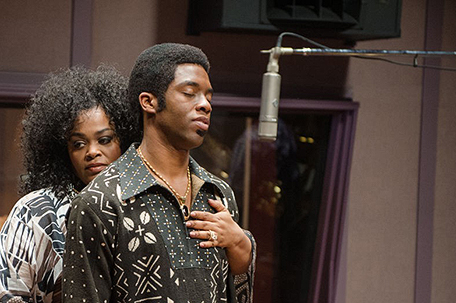 Just last year, Chadwick Boseman successfully channeled the spirit of Jackie Robinson in 42, a powerful biopic about the Hall of Fame great who made history when he integrated Major League Baseball in 1947. In Get on Up, the gifted young actor is already impersonating another legendary African American, the Godfather of Soul, James Brown (1933-2006).

Unfortunately, this revisionist fairytale works better as a jukebox musical than as an accurate recitation of the late crooner’s checkered past. The problem is that Brown simply is hard to portray sympathetically, despite his overcoming abject poverty and a dysfunctional childhood on the road to superstardom.

Yes, he was abandoned by abusive parents (Viola Davis and Lennie James) at the home of an aunt (Octavia Spencer) in Augusta, Georgia who did her best to raise him in the absence of a father figure. Nevertheless, James dropped out of school in the 7th grade, took to the streets, and spent several years behind bars for an armed robbery committed at just 16.

Upon parole, he made a foray into showbiz after joining the Famous Flames, the first of numerous R&B groups he would headline over the course of a career marked again and again by bad break-ups due to disagreements he had over salary with disgruntled sidemen. Brown would also have further run-ins with the law, ranging from repeated arrests for domestic violence against three different battered wives, to embezzlement, tax evasion and bankruptcy, to another three years in prison for illegal drug and weapons possession, assaulting a police officer and resisting arrest.

Somehow, Tate Taylor (The Help) has figured a way to put a positive spin on the tarnished legacy of this terribly-flawed figure. Rather than have the film unfold chronologically, the inventive director has crafted an oft-confusing flashback flick which jumps backwards and forwards in time in dizzying fashion with no apparent rhyme or reason.

That scattershot approach ostensibly enables Get on Up to sidestep the more tawdry episodes on Brown’s resume without appearing to leave gaping holes in his life story. Consequently, the movie sits on solid ground during gyrating Boseman’s lip-synched, onstage performances of such James Brown hits as “I Feel Good,” “It’s a Man’s World,” “Super Bad” and “Say It Loud, I’m Black and I’m Proud,” but not so much whenever it shifts its focus to its morally-objectionable protagonist’s poor people skills.

A nostalgic indulgence which, like the cinematic equivalent of a fluffy fanzine, eschews serious criticism of a revered icon in favor of a pleasant parade of his most memorable classics.

Rated PG-13 for sexuality, drug use, profanity and violence

To see a trailer for Get on Up, visit: