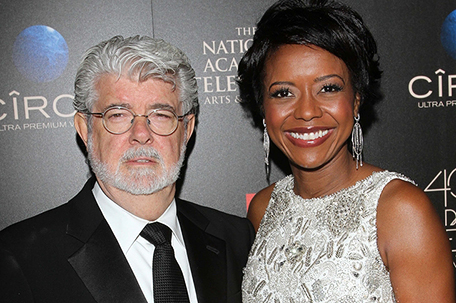 The George Lucas Family Foundation has announced a 10 million endowment that will support the recruitment of talented USC School of Cinematic Arts students from communities that are underrepresented in the entertainment industry.

The gift, which is the largest single donation for student support in the school’s history, will establish The George Lucas Foundation Endowed Student Support Fund for Diversity, which will provide financial support for African American and Hispanic students enrolled at the school, meaning African American or Hispanic students at the undergraduate and graduate levels will receive priority consideration.

Student support will be split equally between male and female students who will be known as George Lucas Scholars or Mellody Hobson Scholars.

The first recipients will be awarded for the fall of 2016.

“George Lucas and Mellody Hobson are inspiring leaders in their fields, and tremendous friends to the USC community,” said USC President C. L. Max Nikias. “This gift will nurture the next generation of artists, supporting scholarships that enhance access in the cinematic arts, while bringing new and diverse voices and stories into our lives.”

Added Lucas: “Hispanic and African-American storytellers are underrepresented in the entertainment industry. It is Mellody’s and my privilege to provide this assistance to qualified students who want to contribute their unique experience and talent to telling their stories.”

Dean Elizabeth M. Daley said: “We are so grateful to George and Mellody for their continued support and in particular for this amazing gift, and their recognition of the need to encourage the Hispanic and African-American storytellers of tomorrow.”

The Lucas Foundation’s gift supports the Campaign for the University of Southern California, a multiyear effort that seeks to raise $6 billion or more in private philanthropy to advance USC’s academic priorities and expand its positive impact on the community and world. Four years after its launch, the campaign has raised more than $4.5 billion.

Newlyweds Mellody Hobson and George Lucas had a daughter, Everest Hobson Lucas via a surrogate on August 9