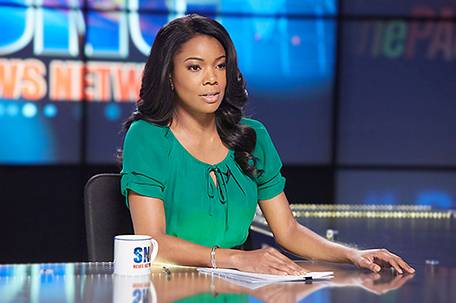 Gabrielle Union may have lost out to Kerry Washington for the chance to play “Scandal’s” Olivia Pope, but the recently engaged actress has found a character just as engaging via her new show “Being Mary Jane.”

The hour-long series, BET’s first drama, centers on Mary Jane Paul (Union), a CNN-type anchor who juggles professional and family issues while searching for Mr. Right. Since the network attracted more than six million people when it aired a 90-minute film version of “Being Mary Jane” in July, anticipation for the show has built to a healthy frenzy.

Despite the positive reaction, BET opted to build hype for the show by waiting six months to air the show’s debut. For Union, Mary Jane was just what the doctor order in terms of finding a role that she could truly sink her teeth into.

“I read this script and thought, ‘I can be good at this, this is in my wheelhouse.’ “The role challenged me in a way that I was ready for,” the entertainer told AccessAtlanta.com as she revealed that Mary Jane’s professional personal was modeled after former CNN anchor Soledad O’Brien. “She’s the barometer for black female journalists with integrity and compassion that are well respected.”

Although Mary Jane seems to have it all, Union is quick to point out that her character is no saint as she works at a channel that is “”fifth out of five news networks struggling for ratings.” That results in Mary Jane being dogmatic and sanctimonious at work while displaying anger and resentment towards the family members she helps support. All this, in addition to a history of making poor choices when it comes to men.

When Michael Logan of TV Guide Magazine offers that Mary Jane’s character ‘sends out a rather anti-Cosmopolitan message,’ Union remarks; “It’s true. Our show claims it’s not possible to have it all. Something — or someone — always suffers. Will Mary Jane ever get her s–t together? What’s the fun of that? Where’s our show if that happens? We gotta give you a few nibbles of hope, enough of an appetizer so you’re not starving to death, but we can’t give you the whole entrée. That’s one area where Mary Jane and I are a lot alike. We’re both just shooting for “good enough.” We see a lot of that in the women on TV, from Hannah Horvath on Girls to Olivia Pope on Scandal. They are smart women fully capable of making reasonable decisions for others but not for themselves, and we find that endearing. Besides, when did making good decisions make good TV? Who wants to be their mother’s ideal? Who wants to wear sensible shoes and sensible underwear and a hairstyle that takes five minutes to do? Not me! A lotta people live that life. They sure as hell don’t want to tune in and see it!”

As fans gear up for the return of “Being Mary Jane, Union acknowledging the love given to the show as well as the hard work that allowed everyone involved to enjoy the accolades.

“It goes into our source of pride,” the actor. “We weren’t surprised. We were prepared. We knew we did good work. But the series makes the pilot look bad. It’s so good! If you love the pilot, you’ll gag for the series.”

The ratings place “Being Mary Jane” as the second highest rated show on all of TV behind NBC’s America’s Got Talent in the same target demographic (adults 18-49).

BET’s show “The Game” returned on the same night as “Being Mary Jane” and was the second highest rated cable TV show. “The Game” had a 1.7 rating in the adults 18-49 target demo, drawing 3.6 million viewers.