To Funk And Die In LA: A Conversation with Nelson George 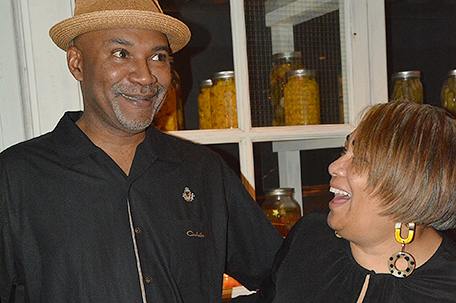 Brooklyn native Nelson George — author, music aficionado, broadcaster, producer, and filmmaker — has been a champion for the African-American community for years. Many may be familiar with George’s work as writer and producer in the Netflix original series, “The Get Down.” He has dedicated the entirety of his career to exploring and sharing the Black experience.

As a former editor of Black music at Billboard Magazine, George is a true lover of Black music in all of its forms; jazz, funk, R&B, and hip-hop. George’s work and perspective are respected sources of knowledge for Black music and its prominent position in American culture. Recently, George released his fourth book in the D Hunter Mystery series called “To Funk and Die in LA.” On September 26th, George visited Philadelphia for an intimate conversation about his latest addition to the crime-fiction series.

The African American Museum of Philadelphia (AAMP) and South Restaurant partnered to invite George to participate in their “Conversations with South” series.  The evening began with a few words from Vanesse J. Lloyd-Sgambati, founder of The African American Children’s Book Fair. A portion of the proceeds of the books sold that evening went towards purchasing books for school-aged children in Philadelphia. The conversation was moderated by Dyana Williams – Philadelphia royalty, multimedia personality, and long-time friend of George. In a candid conversation, George shared the impetus for the beginning of his journey as a writer.

“When I was coming up, most of the books that I read about American music, be it jazz, the blues, R&B, rock and roll… they were all written by White writers,” George said. “Very few were written by people who are participants in it. I say as Black people, you may not be a musician but our music comes out of communal experience. The way that people dance affected the way that people played.”

“The thing that made me really want to be a music writer was I remember reading Rolling Stones magazine’s Brothers Johnson Stomp review,” George continued. “I said to myself, the guy that wrote this review doesn’t dance. He was writing about this record like it was a Bob Dylan record. If you danced, you felt that record. I thought so much of the music and our culture is being critiqued and documented by people who aren’t participating in the rituals of the Black community. That made me want to take the leap from someone who read reviews to someone who wrote reviews.”

The journey from editor, to review writer, to author was all inspired by George’s desire to share the wealth of the Black experience as all it has to offer with the masses.

His goal has always been to help redefine the Black experience in our own words, George said. “The whole journey of my career has been to try and take that colloquial experience that we have with music and translate it so that other generations later can have it and be part of the dialogue at as it’s being consumed,” he said.

“To Funk and Die in LA” brings back the main character of George’s mystery series, D Hunter. George describes D Hunter as, “A product of both the world of entertainment, and the world of violence in the 90s crack era where people could get shot just walking out of their house. He’s obsessed with security, protecting people and music.”

“To Funk And Die in LA” — which George dedicates to “Sly Stone, Rick James, Maurice White, and the many funk gods of Los Angeles”—takes the character D. Hunter, a former bodyguard, from the streets of Brooklyn to Los Angeles to investigate the murder of his grandfather. George read the first chapter of the book before garnering audience participation in music trivia. George — who starts all of his projects by writing longhand — encouraged the audience to write down their own thoughts.  The evening ended with a ‘meet and greet’ and book signing.

Rapper, actor, and producer Common currently owns the rights to George’s first three books, but it is still undetermined whether those works will be translated into film. What we do know is that the possibilities are endless for the creative mind of George who continues to strive for “the freedom to be free” while authentically telling our stories.

“To Funk And Die in LA” — as well as a number of George’s other written works — are available for purchase at Amazon, Barnes and Noble, and on his website http://www.nelsongeorge.net/. Let’s continue supporting the work of this prolific writer as he continues to transcribe our stories.