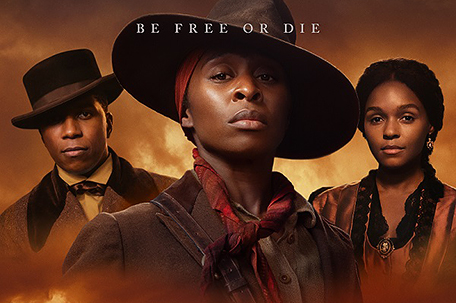 The film depicts the life of one of history’s most courageous African American heroes, Harriet Tubman, bringing her story to the big screen for the very first time. For her work as the titular role of Harriet, Cynthia Erivo has been nominated for two Academy Awards®, for Best Actress and Best Original Song for “Stand Up,” which she co-wrote with Joshuah Brian Campbell.

Kasi Lemmons (“Eve’s Bayou,” “Black Nativity,”) directs and co-writes the script with producer Gregory Allen Howard (“Remember the Titans,” “Ali). “Harriet” is also produced by Debra Martin Chase (“The Princess Diaries,” “The Sisterhood of the Traveling Pants”) and Daniela Taplin Lundberg (“The Kids Are All Right,” “Beasts of No Nation”).

Based on the thrilling and inspirational life of an iconic American freedom fighter, “Harriet” tells the extraordinary tale of Harriet Tubman’s escape from slavery and transformation into one of America’s greatest heroes. Haunted by memories of those she left behind, Harriet (Erivo) ventures back into dangerous territory on a mission to lead others to freedom.

With allies like abolitionist William Still (Odom Jr.) and the entrepreneurial Marie Buchanon (Monáe), Harriet risks capture and death to guide hundreds to safety as one of the most prominent conductors of the Underground Railroad.

Witness the story of a woman who defied impossible odds to change the course of her life and the fate of the nation.

Philadelphia screenings are set for the UA Riverview. Moviegoers can get free tickets through Gofobo. Visit: www.regmovies.com/static/en/us/promotions/harriet-free-screening.