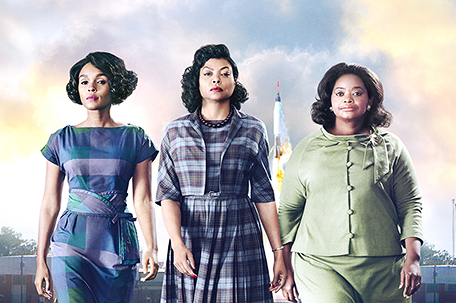 No surprise, really. I think we all fully expected that this would happen.

Originally scheduled for a January 13, 2017 release, Fox has moved up the opening date for Hidden Figures to December 25, giving it an initial limited theatrical release (we assume an Oscar-qualifying run), before a January 6, 2017 nationwide roll-out. So we can officially add the film to our 2017 Oscar potentials, although it’s already on my list.

Given all the marketing materials we’ve seen thus far for the film, presenting it as a relatively innocuous, uplifting family dramedy, a release date during the holidays makes sense.

December is a crowded month; there’s also Will Smith’s Collateral Beauty, Denzel Washington’s Fences, Halle Berry’s Kidnap, and the next film in the Star Wars franchise, which is sure to occupy lots of theaters and dominate at the box office, Rogue One: A Star Wars Story. These are all films opening wide.

Director Ted Melfi’s Hidden Figures, the much-anticipated feature film adaptation of Margot Lee Shetterly’s book of the same name when was published last month, tells the untold true story of some of the African American women mathematicians who worked at NASA during the Civil Rights era.

At the center of Hidden Figures are Katherine Johnson, Mary Jackson, Dorothy Vaughan, Kathryn Peddrew, Sue Wilder, Eunice Smith and Barbara Holley, who all worked at NASA during the Civil Rights era, often referred to as “the colored computers.”

Shetterly, whose father was one of the first African American engineers employed by NASA, is a journalist.

Starring in the film are Taraji P. Henson, Octavia Spencer, and Janelle Monae, as the unsung scientists.