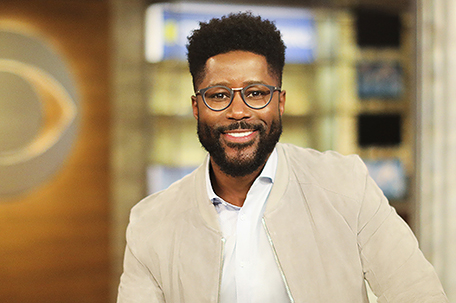 ABOVE PHOTO: Nate Burleson on the set of “CBS This Morning.” The former NFL player will join Gayle King and Tony Dokoupil on the show. (Michele Crowe/CBS via AP)

NEW YORK — CBS News is bringing a little of the NFL to its morning show, hiring former football player Nate Burleson as one of the three co-hosts of “CBS This Morning.”

Burleson has been host of “Good Morning Football” on the NFL Network and, since 2017, an analyst on “The NFL Today,” CBS’ Sunday afternoon studio show during the season. He will continue in the CBS football role.

He will team with Gayle King and Tony Dokoupil on “CBS This Morning” starting next month. Anthony Mason, currently the third person on the team, will focus on culture reporting for the network.

Burleson will also be the second former NFL player on a network morning show: Michael Strahan is a major part of ABC’s “Good Morning America.”

Burleson filled in as a guest host recently, and “his energy was infectious,” Thomas said.

The CBS morning show next month plans to move into a new studio once occupied by MTV, putting it across Times Square from one of the show’s competitors, ABC’s “Good Morning America.”