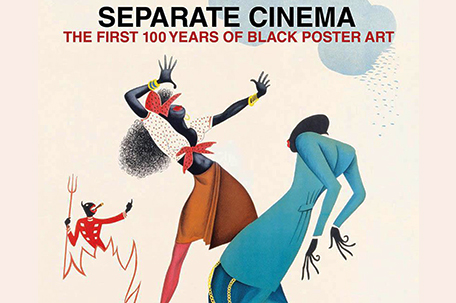 A brilliant overview of the last century of film poster art that … every student of African-American history and culture should experience.’ – Henry Louis Gates, Jr.

Just in time for the holidays, a new book for that cinephile on your shopping list that I may actually pick up for myself. .

On the old Shadow and Act site, I used to have fun with a feature I called “Cool Movie Posters” in which I showcased what I felt were interestingly-designed posters for black films, going back to the birth of cinema. As I recall, it wasn’t a very popular feature, but with the release of “Separate Cinema: The First 100 Years of Black Poster Art”, maybe I’ll revisit it.

This book from Reel Art Press contains 320 pages of color and black and white images and photographs that I’m sure the film buff on your shopping list will appreciate.

The wealth of imagery on these pages is taken from The Separate Cinema Archive, maintained by archive director John Kisch. The most extensive private holdings of African-American film memorabilia in the world, it contains over 35,000 authentic movie posters and photographs from over 30 countries. This stunning coffee table book represents some of the archive’s greatest highlights.

‘This magnificent volume is a celebration of the first 100 years of black film poster art. A visual feast, these images recount the diverse and historic journey of the black film industry from the earliest days of Hollywood to present day accompanied by insightful accompanying text including a foreword renowned academic Henry Louis Gates, Jr., and an afterword by acclaimed film director Spike Lee.

Part aesthetic, part nostalgic, the posters have meaning to young and old alike, and possess the power to transcend ethnicity. From the early independents to the Academy Award-winning 12 Years a Slave, these posters represent a journey and remind people of the pioneers of the past, those courageous and daring African-American filmmakers, entertainers and artists whose dreams and struggles paved the way for future generations.

You can purchase directly from the publisher for $75 at www.realartpress.com or at Amazon.com.