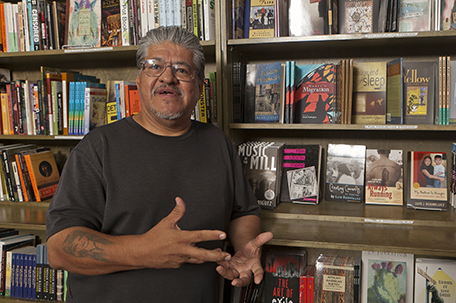 ABOVE PHOTO: Writer and activist Luis J. Rodriguez poses for a photo at his independent bookstore and community center “Tia Chucha” in Los Angeles in 2011. Rodriguez’s collection of essays released Jan. 28, 2020 is among the books Latinos are recommending via social media amid the controversy surrounding the novel, “American Dirt.” (AP Photo/Damian Dovarganes,File)

ALBUQUERQUE, N.M. — When Oprah Winfrey endorsed the novel “American Dirt” for her book club last month, many Latinos took to social media to decry the selection for its stereotypes and caricatures.

The novel about a Mexican mother and her young son fleeing to the U.S. border had been praised widely before its Jan. 21 release. But anger built over “American Dirt” by Jeanine Cummins — a writer who primarily identifies as white — and Latinos shared reading lists and pointed to recent work that went overlooked, offering “alternative” options for those who wanted to read about the Latino experience in the United States.

Across the U.S., Latino writers say they are seeing a jump in sales of those works following social media campaigns to draw more attention to Latino literature as big New York publishers face criticism for ignoring the work or not promoting it enough.

Nicolas Kanellos, founder and publisher of Houston-based Arte Publico Press, the largest publisher of Hispanic literature in the U.S., said he noticed last month some of his books by immigrant writers selling out.

“I’m not on Twitter but my staff told me some of our books were appearing on these lists as suggestions,” Kanellos said. “They are gone now.”

Journalist and novelist Luis Alberto Urrea, who Cummings cited as an influence, reported seeing sales of his early 2019 novel “The House of Broken Angels” jump to his surprise. It was one of the books mentioned on social media.

PEN-award winner and Fresno, California-born writer Daniel Chacón’s “Kafka in a Skirt: Stories from the Wall” also was recommended as a work to understand like on the borderlands. The collection was sought out as comfort following the August 2019 killing of 22 people in a shooting that targeted Mexicans in El Paso, Texas.

In addition, Latino advocates told followers to look out for new work from memoirist and essayist Luis J. Rodriguez, who released on last month, “From Our Land to Our Land: Essays, Journeys and Imaginings From a Native Xicanx Writer.”

“I’ve seen interest in my new book. Yeah, people are asking about it,” said Matt Sedillo, a Los Angeles-based poet and author of “Mowing Leaves of Grass.” He’s also getting more offers to visit colleges to read his work.

Myriam Gurba, a Long Beach, California-based writer who has been a vocal critic of Cummins, said she saw “no silver lining” in the controversy of “American Dirt.” She said readers should have been picking of books by Latinos writers anyway.

Gurba and a group of other Latino writers called #DignidadLiteraria met with publisher Macmillan (Flatiron Books, which published “American Dirt,” is a division of Macmillan) this week demand the publisher hire more Latino staff.

Domingo Garcia, national president of the Latino civil rights group the League of United Latin American Citizens, said he didn’t have a problem with non-Latinos writing about immigration. “But it’s important to have a conversation with publishers about who is getting published and the lack of Latinos in the industry,” he said.

In New Mexico, the state with the largest percentage of Hispanic residents, the conversation shifted this week from “American Dirt” to Levi Romero. The bilingual Spanish-English poet was named as the state’s inaugural poet laureate. He will document his travels around the state to promote poetry through a web journal and podcast.

Santiago Vaquera-Vásquez, an Albuquerque-based writer and author of “One Day I’ll Tell You the Things I’ve Seen,” said he’s happy Latino works are getting recognized but he hopes the interests doesn’t die down. “Let’s not be angry for two weeks and forget about it,” Vaquera-Vásquez said. “Let’s be angry for months.”

The Latin Explosion: A New America, a celebration of Latino music, Nov. 16 on HBO