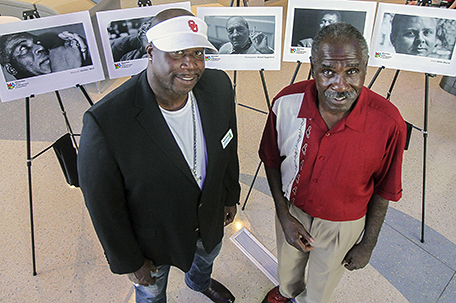 ABOVE PHOTO:  Former professional football player Marcus Dupree of Philadelphia, left, and Lorenzo Bell, a cousin of blues legend Howlin’ Wolf, pose in front of the newest inductees to the Mississippi Arts and Entertainment Expereince Hall of Fame in Meridian, Miss., Thursday, May 31, 2018. (Paula Merritt/The Meridian Star via AP)

MERIDIAN, Miss.  — Three singers, an author and a photographer will be the newest additions to the hall of fame at the Mississippi Arts and Entertainment Experience.

Howlin’ Wolf, born Chester A. Burnett, was from White Station, Mississippi, and became famous on the Chicago blues scene. A guitarist, harmonica player and blues singer, Burnett was known for his signature howl and booming voice. Some of his greatest hits include “I Ain’t Superstitious,” “Spoonful” and “Smokestack Lightning.” He died in 1976.

Pride, 84, was born into a family of sharecroppers in Sledge. His chart-topping hits include “Kiss an Angel Good Morning” and “(Is Anybody Going to) San Antone,” winning him three Grammy Awards. He was inducted into the Country Music Hall of Fame in 2000.

Buffett, 71, is a Pascagoula native. He is known for his hit “Margaritaville” and has fans who called themselves Parrotheads. He has owned a chain of nightclubs, a line of beach clothing and several resorts and casinos. He has also had his own Margaritaville record label.

Morris grew up in Yazoo City, which served as an inspiration for much of his writing. He was editor-in-chief of Harper’s magazine and wrote memoirs called “North Toward Home” and “My Dog Skip.” He died in 1999.

Eggleston, 78, was born in Memphis, Tennessee, and grew up in the Mississippi Delta near Sumner. His color-saturated photographs, often depicting everyday life, have been displayed in prominent galleries.